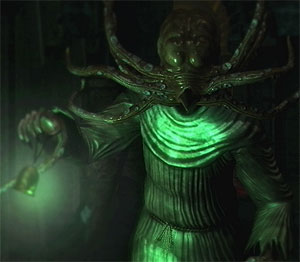 I’ve become convinced that Demon’s Souls, the PS3 exclusive Japanese RPG (but most definitely not a JRPG) that had even the most hardcore of hardcore gamers alternately cursing and crying back in 2009 is one of the best games I’ve ever played. It’s an incredible piece of atavistic, esoteric design that is both incredibly punishing and incredibly rewarding. It’s a game that puts an unusual level of demand on the player to explore, experiment, and examine- sort of a “3x game”, if you will. It was one of the first PS3 games I bought when I purchased the console in the Fall of 2010 and I’ve put around 30 hours split between two characters and I’m still learning things about the game. I find the game almost unbearably stressful at times to the point where I’ll put it away for weeks but when I come back to it I find its cold, grim atmosphere oddly embracing and all-enveloping.

I’ve also come to think of Demon’s Souls as something close to a spiritual game, literally haunted by the ghosts of players who were there before you. The player even becomes a ghost themselves when the physical body dies and the player must carry on in Soul Form with a hitpoint reduction but also with silent footsteps. You can touch a bloodstain and watch someone else’s mistakes, read spectral messages for guidance, or you’ll see phantoms of other players fighting long-vanquished adversaries. There’s a sense of deep, lonely isolation that pervades the game but it clashes against the feeling of never being alone due to the game’s innovative, persistent online functions. It’s strange to speak of a video game in such terms, but at all times you’re surrounded by spirits. There is a sublime profundity in that sensation, one that you’ll not find in any other game.

It’s also emerged as an obtuse metaphor for the experience of life, death, and rebirth. The design paradigm is really as old as video games itself- each of the game’s levels are the same every time you visit them, and a large component of the gameplay is in memorizing enemy locations, strategic points, and expedient pathways. It’s expected that you’ll die and restart the level- there are few checkpoints, so your survival depends on your knowledge of the level and its particular patterns and organization. This is where Demon’s Souls becomes very much a game about observation and education- even when many of the game’s core mechanics are deliberately unexplained or obscured from the player. The tutorial is just about as basic as it gets- left stick to move, press X to attack, and so on- and it ends in your death at the hands of a vile demon called the Vanguard. This is the ultimate pattern of Demon’s Souls- live, learn, die, and apply what you’ve learned in the next life.

Death is frequent, brutal, and often unexpected but never unfair or unjustified. When you die, it could be that you’re not quite ready for a particular area or adversary. It could be that you’ve not properly observed the attack habits of a foe. It could be that you don’t have the right equipment. Or it could just be because you were careless, arrogant, or negligent. The game punishes you by taking away all of the souls, a sort of ethereal currency and experience point measure, that you’ve earned in that life. If you can make it back to where you died, you can reclaim them. If not, they’re gone forever. It does give you a second chance, at least.

The game reminds me of playing games in the 1980s, back when we didn’t have YouTube videos or Gamefaqs.com to tell us how to play a game. We also didn’t have elaborate tutorials, waypoints, or shimmering “jump here” indicators that prevent failure. It makes me think of playing Simon’s Quest on the NES and having no clue what to do or where to go next and just working it out for myself. Except, of course, Demon’s Souls isn’t horribly translated and buggy like that game was.

The rewards for finding your own path through the game are great. Every battle feels like a huge victory. When you walk into a chamber and there’s a gigantic Dragon God that you’ve got to defeat, piecing together clues and exploring the environment yields an unexpected solution to the problem- a terrifying situation that is almost certain to end in death becomes a monumental victory over impossible odds. Other games do this, but in Demon’s Souls it feels somehow larger, more meaningful, and relieving.

I still have a long way to go with the game, and I’m looking forward to playing through it with different character types and trying different strategies. There are sidequests, of a sort, but nothing like the routine pick-up-and-deliver fetch quests of most RPGs. There’s nothing that specifically tells you how to do them and they can be failed. Most result in special items, from what I hear. This is part of the mystery and wonder of the game, the things it keeps hidden to lure you into its unique world. I’d encourage anyone getting into this game to completely avoid any kind of strategy guides or online spoilers because discovery is a huge part of what makes this game so special.