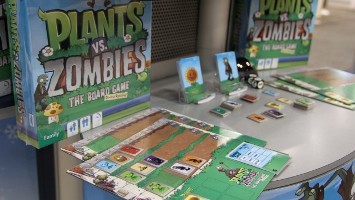 Gotta admit — didn’t see this coming, although I suppose it makes sense. PvZ could translate quite well into a tower defense boardgame, sort of like Castle Panic. That said, it’s developed by Screenlife, the designers of those incredibly awful Scene It! games, so I can’t say I’m incredibly optimistic. Prove me wrong, guys. I’d like to play this with my daughter, but she’s turning into a boardgame connoisseur and will not tolerate cash-in schlocky bullshit. No idea where she gets that from.

4 thoughts to “Plants vs. Zombies: The Board Game”