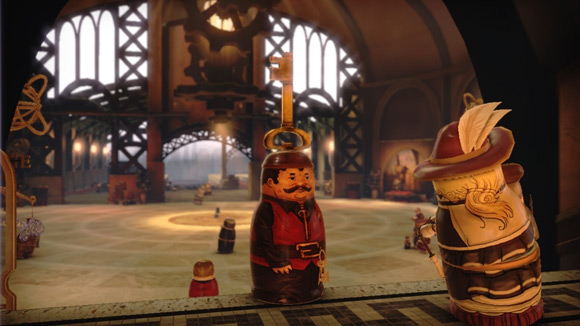 I’m currently playing – and enjoying the hell out of – Stacking, the latest confection from Double Fine. It’s sort of an adventure/puzzle game without an adventure game interface – instead of managing an inventory, you “stack” into a wide variety of characters, each of which has different abilities and characteristics, to solve challenges and progress. Oh, and the entire world consists of Russian matryoshka nesting dolls, and the narrative is about a little dude saving his siblings from the oppressions of child labor. This IS Double Fine, after all.

Gamasutra recently published an interview with project lead Lee Petty and studio creative director Tim Schafer about the game, the art of making downloadable games, and, most interesting to me, the act of making truly expressive games.

“Gamasutra: “I’m not surprised that Stacking is an artist-led project. It’s so creative in the visual sphere. One thing that your Amnesia Fortnight did is give you a chance to put people in different disciplines in charge of projects, right?

Tim Schafer: Yeah, you can definitely see the mark of Lee or Tasha [Harris, lead for Costume Quest] on their games, and I think that’s one of the cool things. Because if you’re going to make this argument about games as art, then I think they have to be an expression of the people who make them. Not just the person in charge, but the whole team, and the company who made them.

I think with games, you should always look at them and be like, “There’s no one else who could have made that game, except for the person who made it.” As opposed to a lot of games where they could’ve been farmed out to any work-for-hire developer. Which is fine — but you know, the thing our company is going to do is to try and make games that are more expressive.”

It’s very cool to see the general concept of games as art discussed in a more concrete context – without any pretension or callbacks to the same clichéd examples. Here, we’re talking more about vision and the ability to express it in a unique way. That sounds like art to me – and I don’t even need to be wearing a black turtleneck or sipping an overpriced latte to think so.

READ ALSO:  Score one for print: 1Up Presents

The piece goes on to discuss more of the business end of making downloadable games (vs. big budget boxed products), though it was presumably written before the big Sesame Street announcement from Tuesday. It’s more than worth a read, no matter which end of the process you find most interesting.

7 thoughts to “Stacking up expressive games”