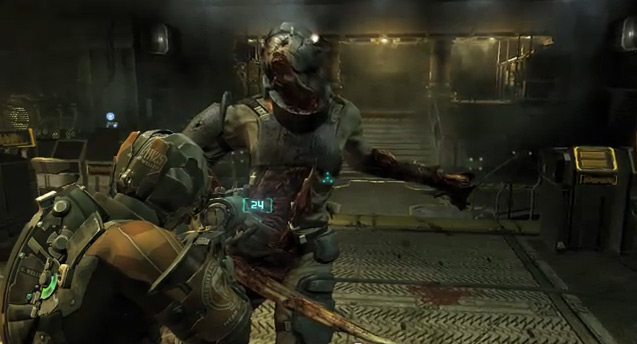 So it looks like we get two new chapters for our trouble in the new Dead Space 2: Severed DLC pack.

Just for clarification before I post the PR speak: I have never played Dead Space Extraction and thus have no earthly idea who Gabe Weller is unless he’s the less famous brother of terribly underrated actor and ancients historian Peter Weller. …but I’m guessing that’s not right.

Dead Space 2: Severed extends the Dead Space 2 story with the addition of two stand-alone single-player chapters. This digital pack will take players through the haunting story of Gabe Weller, who fans will remember from the award-winning game Dead Space Extraction. As a security officer, Weller comes equipped with a one-of-a-kind security suit and an upgraded, more powerful Pulse Rifle that will help him unleash his own blood-curdling adventure across the Sprawl. Lurking behind every corner is another bloodthirsty monster but the big surprise for Weller (and fans) is the return of the Twitcher, a grotesque enemy who first appeared in the original Dead Space game.