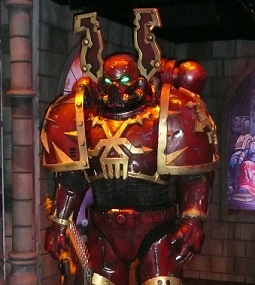 Welcome to Calendar Man where I outline all of the games you can spend your hard earned cash on. That fella up there is some Warhammer 40K guy, photographed at 2010’s E3. I think he’s a Space Marine. Bill could tell you exactly what he is. I like to think his name is Carl and he likes kittens, caramel lattes and Carly Simon records. Secretly Carl thinks the Orcs are just misunderstood. On with the games!

I’m not mentioning Carl simply because I have old E3 pictures littering my hard drive, but because the latest Dawn of War expansion drops on Tuesday. Dawn of War II: Retribution has six playable races and a single player campaign chosen for your race. I think the races are Space Marines, Orcs, Gummy Bears, Lemurs, Leprechauns and a band of space hippies called the Rainbow Star Coalition.

A plethora of Rango games come out on Tuesday, all of which feature a chameleon voiced by Johnny Depp in the movie of the same name. I have no idea if Mr. Depp does the voice in the game, or if the game is voiced at all. Research! If you plan on seeing the movie, the game comes with a ticket. Not sure if it’s worth spending 40 bucks on a game to save eight bucks on a movie ticket, but I can’t understand a goddamned thing my 2nd grader brings home for math homework. Skip counting, what the hell?

Next up, for all of you MMO fans is Rift from Trion Worlds. Last I knew of Rift was that people were having a tough time getting into the game for the Beta. I don’t know where that falls on the PR spectrum but I doubt they’ll be congratulating themselves on winning the “Best Game No One Could Get Into” award come end of the year.

I don’t know why they call boxing the sweet science. When I was in 5th grade, this kid kept pelting me with snowballs and I told him that if he kept it up I was going to hit him with one. He kept it up, so I nailed him in the kisser with a snowball. His brother proceeded to punch me in the nose. There was nothing sweet about it. I’m sure Fight Night Champion, the latest in the Fight Night series will be better than getting punched in the face. I mean, how can it not be?

Fans of Wii hunting games rejoice! Finally you can travel to Alaska and give those animals what they’ve got coming, namely a gut full of lead! Or your dismembered torso if you’re not quick enough on the draw. Remington Super Slam Hunting: Alaska comes out on Tuesday and sounds too much like a Nintendo title for my comfort level but that’s between Remington and Nintendo’s lawyers.

I have no idea why Chuck E. Cheese is appealing to kids. Giant, animatronic vermin sing and dance while you eat pizza that tastes like it was baked on a hobo’s stomach. Oh wait, I know, video games! Now you can bring the Charles E. Cheese experience home with Chuck E. Cheese’s Sports Games for the Wii. Wait, there are no sports at Chuck E. Cheese’s and there’s no nasty pizza and surly waitstaff in this game. Duped again!

Finally, I know this will also fall in next week’s column, but Pokemon Black and White drops on Sunday, March 6th, putting it in between this column and next week’s. Let this serve as a reminder lest you find yourself sans-Pokemon.

Nothing too spectacular on the deal front this week which is to be expected given the time of year and lackluster weekly releases.

Best Buy – Best Buy has buy two get one free for both $9.99 PSP games and PlayStation 3 Greatest Hits games. Given the recent additions to the Greatest Hits line, this may not be a bad deal. If you buy Dawn of War II: Retribution there, you’ll get a free Space Marine pack. No word on if Carl is included. Lastly, this isn’t a sale item, but the Rock Band 3 Squier real guitar controller finally releases this week for $279.99.

Toys R Us – I didn’t get a Toys R Us ad this week, which is criminal given how much I spend on toys. If you preorder Pokemon Black and White you get a wall sticker thingy when you pick up the game. Epic Mickey is on sale for $39.99 with a free t-shirt that says “I fought with Epic Mickey’s stupid camera and all I got was this lousy t-shirt”. If you buy a Kinect sensor for $149.99 you get 20 bucks off of a Kinect game. Finally, if you buy Fight Night Champion or Bulletstorm you can get either Need for Speed Hot Pursuit, Dead Space 2 or Fallout: New Vegas for $20.