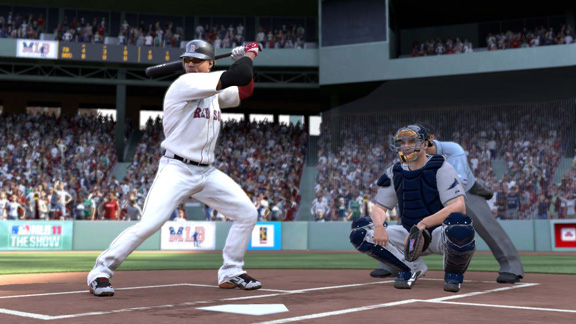 When you scan the fact sheet a lot of what Sony is touting are periphery issues — a new custom camera feature, a new co-op mode, stadium specific sounds and cameras, online league stuff, etc.

But wait — there’s more. Some good, some great and some I wish Sony would do differently…

The feature that stands out, to me, is the new analog systems. You can use the right stick to hit, pitch, bunt, and throw. Three of those work great. I am in love with the pitching system because it’s tough to always throw strikes — and more importantly — LOW strikes.

One of the keys in pitching effectively, in real life, is keeping the ball down. If you can do that with consistency and throw strikes doing it you’re on your way to being Greg Maddux. Congrats!

In most baseball games throwing low strikes is about as easy as, well, throwing high strikes. In The Show 11 if you try to locate pitches on the lower half of the zone, there’s a great chance, if your pitcher isn’t terribly accurate, that you’ll hit a lower than anticipated target. As a Reds fan, using Volquez to hit the bottom part of the zone is freaking *hard* — as it should be. His fastball seems to dip a bit so he tends to miss that low target. Volquez has to use his speed and power and hope he can get hitters to go fishing.

The result? I have pitched Volquez several times and there are games when he’s ‘on’ and he’s damn near unhittable. Other games? I walked six one game and was both frustrated and elated that I witnessed such a lack of user control in a baseball game. Throwing Arroyo, a pitcher with better control, is easier to locate pitches but certainly not a guarantee that you’ll locate the pitches where you want them.

Arroyo also has a nasty “12-6” curveball. Another pitching maxim is that if you can throw strikes with your curve you are going to be tough to hit. Throwing consistent strikes with a looping curve, when using this analoig system, is tough. (Unless you want to throw it right down the pipe). This makes the pitcher/hitter confrontation truly wonderful and I can’t get enough of this part of the game.

In this year’s game I see ample walks and strikeouts. And it might sound silly but most games simply screw this up and you have to have these two facets of the game working together or you have a game that is not unlike baseball, but it ain’t baseball.

Hitting, using the stick, isn’t as much fun or as realistic. It’s basically a pull back/push forward mechanic that does nothing for me. Your mileage my vary but I’m still a guy who likes “timed” hitting over zone hitting and while the analog method is timed with a tint of zone mechanics, I much prefer straight up timed hitting as my reflexes just aren’t what they used to be. Yes, I am an aging gamer. Past my prime. I’m officially the Jamie Moyer of videogame baseball critics. Thankfully analog options are just that — an option.

I like the analog throwing quite a bit — very organic and easy to comprehend. Simply push the right stick to the base you want to throw and if you use too much dynamite it increases the chance of making a bad throw. Easy.

The other area in which I think the game has improved is in its “timing”. This is one of THE most difficult things to nail down in a baseball game and frankly an area in which The Show has always struggled. By “timing” I mean the speed of the runners that work in conjunction with the pace of the ball and the reaction time and arm strengths of the outfielders.

If this part of the game is screwy it messes up the entire experience on the field. Runners can’t score from 2nd base on singles, balls hit down the line that reach the wall turn into long singles (an area in which the Show has always struggled), and so on and so forth. This HAS to be right or the game basically breaks down and becomes a station to station game which simply isn’t how baseball works.

This year The Show NAILS this. The fine tuning done in this area is noticeable. Scoring from 1st on a double, gappers resulting in stand up doubles, hard liners over the 3rd/1st base bag also resulting in doubles even with a slow runner, it’s about as good as you can expect and it cannot be emphasized enough.

So what about the gameplay isn’t clicking?

I still feel and have always felt concerning this franchise, that hitting is a bit unrewarding. In some games, most notably the old High Heat series and the old MVP Baseball series, when you caught good wood on a ball you almost FELT it. The minute you made contact you could sense it — “ohh I got all of that one..”

You don’t get that here — or at least I don’t. Home runs when they leave the bat feel like every other hit ball and it really shouldn’t feel this way. Something just isn’t right and I don’t know if it’s the sound or what but I hit homers that sound like ground balls and I’m surprised when they leave the yard.

READ ALSO:  Mojang Wins Round One in Scrolls Case

My other issue is that games still take too long.

Even when you choose “fast play” a game takes anywhere from 50 minutes to an hour. Sorry, but that’s too long for a baseball game. I don’t need to see every foul ball go into the stands, every tap of the cleat, and anything that does not concern the gameplay on the field. That’s what fast play means, right?

LET’S GO PEOPLE I HAVE THINGS TO DO.

I want the game to move along at a much faster clip. There is no reason whatsoever that a baseball game, when you take off all of the presentation fluff, should take more than 35-40 minutes. When I choose “fast play” I want *all* of that extra crap gone and The Show still seems to want you to watch and gaze at how pretty it is — and it IS pretty but there are so many ways they could speed things up and yet they don’t allow you to skip stuff.

It doesn’t take away the fact that it’s a brilliant game on the field, but an hour long game just isn’t necessary and honestly I don’t have time to play more than a game a day (after the review process is over) because of it.

Next up — Franchise time.