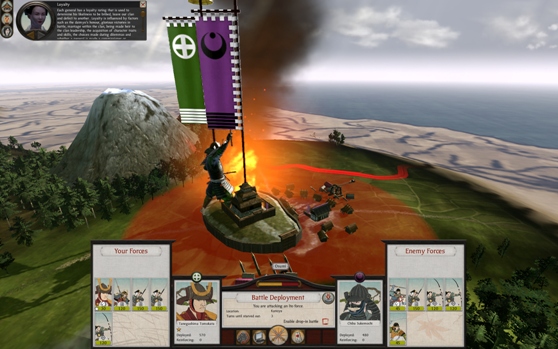 We are mighty Clan Shimazu. We have the most loyal of leaders and our way is that of the master swordsman. Our word is our bond.

To the Shimazu, loyalty is everything.

And we are at war…

The hated Ito Clan to the east has built a small castle town near our homeland and they are preparing an assault. Our primary mission in the first phase of our plan to name our Daimyo as Shogun is to remove Clan Ito from the map, either as a campaign of annihilation or to make them a vassal, serving us and paying us tribute as we demand.

To the north is Clan Sagara. We are currently trading with them, importing horses, and as they sit directly to our north we will attempt to negotiate a treaty before committing too many forces to the war with the Ito.

We will also begin training more troops in the form of Yari Ashigaru, Yari Bowmen and Katana Samurai. Upgrading our empire is also of prime importance as we need better irrigation, a large harbor as we need to begin trading to increase income, improved roads, and we must use the local smithy to our advantage by building a weapon workshop as we are expert swordsmen and plan on using them soon enough.

We have a loyal General at the ready. A 25 year old commander named Tanegashima Tomokata, who has the honor of leading the assault on the Ito province of Osumi. What he lacks in experience he makes up for in total loyalty to our Clan and our Daimyo, our 31 year old leader who many call self-centered, but he has survived many battles, which has caused many to feel he has the luck of the cat with him.

Tomokata’s army is small but ready as we will surprise the Ito dogs at the start of the year. Tomokata has with him a regiment of Katana Samurai, Yari Bowmen, and two regiments or Yari Ashigaru spearmen as well as his General staff and retainers.

As construction begins to improve our rice paddy irrigation and a weapon workshop, our diplomat successfully secures our northern border by successfully negotiating an alliance treaty with Clan Sagara to the north.

Tomokata marches his army directly to the fort and launches his assault – the Ito have been lazy in their attempt to reinforce the fort as their main army is in sight but still a day away from reinforcing. Tomokata’s army has the numerical advantage and the fort of Osumi falls with our army taking some damage as we have lost one brave and honorable Ashigaru regiment – as they lead the assault. Upon seeing the fall of one of their provinces, the main Ito army retreats, we can only assume to gather more forces in preparation for a counterattack. We will be ready. 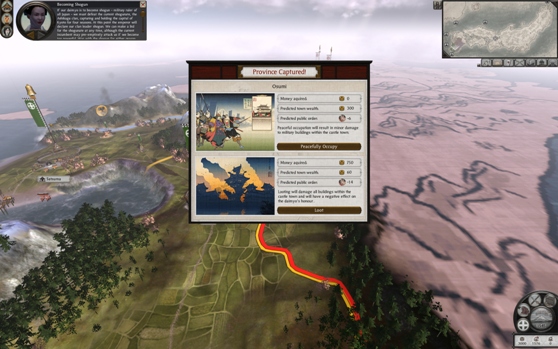 Before spring ends we immediately begin recruiting more troops from our nearby homeland – more archers, spearmen, and samurai. The samurai will take an extra season to train but the others should be ready by summer to reinforce Osumi.

As spring turns to summer we have received word that a major Clan has fallen – the mighty Oda from across the sea has been conquered. A surprising turn of events so soon in the war. The Uesugi and Takeda clans have also formed an alliance…something to be wary of if this bond holds.

Our new allies, the Sagara, have requested we join the war with the Otomo Clan. We will honor our alliance.

Trouble has popped up in Osumi as the residents of the fort are not happy that we have so easily took command of their city and a rebel leader has formed an army to oppose us. We expect nothing less from the Ito. The rebel army has trampled fields and burned down a harbor. We must send Tomokata to face this threat, but we also must discover the location of the Ito army that is sure to come soon to attempt to take back their fort.

Reinforcements have arrived to help defend the Osumi fort in case the Ito return and this leaves Tomokata free to attack the rebels, who have managed to field a surprisingly large force – mostly of rag tag units. Tomokata crushes the rebellion and kills its leader but loses another regiment of Yari, but has also gained valuable experience, and has been promoted to the rank of 2 Star General, which has increased his ability to maneuver his forces when on the march.

It is now autumn, 1546, and the Ito have returned to reclaim their land. Tomokata’s army has been replenished and now our Daimyo has left our homeland and found a mountain pass to attack the Ito from the north while Tomokata leaves the Osumi fort to face the Ito General. We will not suffer a siege. The Ito army is formidable and as our Daimyo crosses the bridge into Ito territory they launch an attack, pushing our Clan leader back in what has been deemed an honorable defeat.

Tomokata, waiting to pounce on the now fatigued and wounded Ito army, counterattacks and kills every last Ito soldier, including the General. The door is now open to refit the army and attack the last remaining Ito fort which would give our clan complete control over all Ito territory. There will be no vassalage; we will wipe this clan from history.

While we continue to fight the Ito, news has arrived informing us of the formation of two new Clans: the Sakai and the Asai, we must keep an eye on such developments. We have also received word that a Clan to the north, the Shoni, has declared war on us – we must discover what our allies the Sagara are doing to bring us into such matters. Finally reports of several minor clans falling have reached our ears. Other clans are establishing themselves on the mainland and the Ouchi clan has adopted the religion of Christianity.

While our war rages we have been upgrading our lands at home and now have access to a trading vessel, which has discovered a trade route in the west with mercenaries who hold sway over incense which we can use in rituals and trade to gain further income to fund the war.

By 1549 the alliance between the Uesugi and Takeda has crumbled as now the two clans are at war. We must keep this in mind if we ever deal with these clearly dishonorable clans.

The Ito’s days are numbered; even though, we must be cautious. Our armies now contain improved Samuari warriors as well as light cavalry. We have sent scouts ahead to get a lay of the land and they have not returned. We must assume an ambush by Ito forces. As Tomokata continues to march toward the last Ito stronghold we come across dead Yari spearmen. The work of the Ito. Tomokata decides to press on, and as winter 1549 approaches we encounter a small Ito force trying to make its way back home. Winter or not, we will end this now.

Tomokata uses his brilliant speed and catches the army before it can reach the safety of the fort and crushes them – the Ito fort falls basically without a fight. We would expect nothing less from these cowards.

It is now 1550, five years into our struggle to declare our Daimyo as Shogun. The Christian Ouchi are nearby, the Sagara is asking for assistance, our income remains steady despite a large army expense, we are at war with a clan with which we have never met, our Daimyo has in his possession the fabled Sword of Amaterasu which instill fear in all who see it on the field, Tomokata has claimed a mistress, who some say is his bodyguard and protects him from assassination, and an unknown young General has just arrived on our doorstep, asking to join our ranks for 1,000 gold.