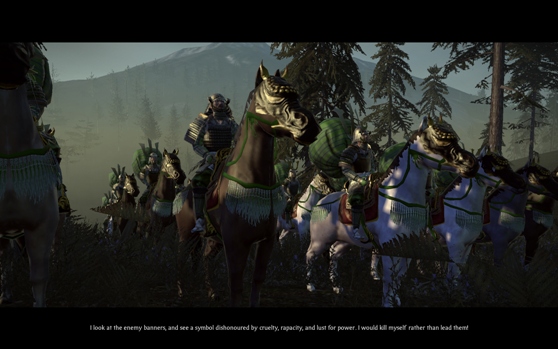 The first five years of our quest to claim the prize of Shogun have been fruitful. Clan Shimazu has established itself as a strong, loyal clan and has wiped the hated Ito from our island. With our allies, the honorable Clan Sagara at our side we now set sights on new lands to the north.

But things are about to get complicated…

The year 1551 starts off as the sea cries, flooding our homeland and stronghold with large waves and terrible storms, wrecking our economy for several seasons. Funds are thinning as we need income to pay our troops, which grow in number each season. This is hopefully but a minor setback.

The Sagara are at war with Clan Shoni, one of the last holdouts on our small island. The Shoni is a small but fierce clan and the Sagara have been fighting with them for years and we can now offer assistance.

As we begin to marshal our forces north, led by our Daimyo and our new eager yet inexperienced general, word has come that one of our Daimyo’s sons has come of age and is ready to begin his first military campaign assignment. For now, we will keep him in our homeland, secure from the war, while he raises his own army to lend support if needed.

The hero from the Ito war, General Tomokata remains stationed in the former Ito stronghold, on the border with the Christian Ouchi Clan. The Ouchi do not trust us, which will soon be there undoing, but we must first focus on the Shoni and if the Ouchi decide to invade, Tomokata will be our wall.

The march from our home to the northern tip of the island will take a few seasons so we must prepare. Money is low so we cannot continue to improve our infrastructure but hopefully the spoils of war will help us in obtaining the extra funds we need.

The year is now 1552 and our Daimyo and new General Fujitsu lead separate armies against the Shoni, supported by Clan Sagara’s small force. Our Daimyo sacks one Shoni fort without resistance while Fujitsu storms the larger fortress at Buzen, slaying many Shoni while receiving moderate casualties. Clan Sagara proved little help in this struggle, but we will continue to support our allies, as weak as they may be. The constant war with the Shoni clearly wore them down while we delivered the killing blow.

As we begin rebuilding the damaged fort cities and taking stock of casualties, we receive a message of Imperial Recognition from the Imperial Majesty! He has heard stories of our clan’s strength and honor and will be keeping a watchful eye on our progress. We are honored by this message, but know all too well – if we grow too powerful the current Shogun will attack. We must be cautious.

We have received word from across the sea that powerful Clan Uesugi has been destroyed—no doubt by their former allies the Takeda. We see no honor in this.

Our trade ship has encountered the Mori Clan, who agree to do business with us for our newly discovered silk. This has improved our seasonal income, which is key now that we have two new provinces under our control who are threatening to rebel – we must lower taxes or provide more troop support. We have also hired a Metsuke, a captain of the secret police to protect generals from assassination and to quell uprisings. He is stationed in the former Shoni capital.

The Mori are at war with the Ouchi, which gives us reason to continue our subjugation of the island. Our plan is clear, we declare war on the Ouchi, send Tomokata north to invade while Fujitsu moves south and we crush them in a vice. We can ask the Sagara for assistance; we must, by our code, continue to support them. As winter comes to a close, the year 1553 begins and we launch our attack Tomokata moves his army north and Fujitsu follows by moving south – the Ouchi have nowhere to go.

As our armies approach the citadel, the flag of Clan Sagara flies high as dead Ouchi lay strewn about the field. Our scouts return, telling us that Clan Sagara is a formidable clan, much more than we ever imagined. Their power matches our own. We asked for help to fight the Ouchi out of respect for our ally and they took the initiative and destroyed them in one mighty assault. The Sagara now have control of the province, and while we are happy that our ally is thriving, we must be wary. Not every clan is as honor bound as the Shimazu and now that the Sagara has shown its teeth, we must not get bit. This situation has grown surprisingly dangerous.

Meanwhile, one of our retainers has offered the hand of his daughter in marriage to our Daimyo’s son. Rumor has it that she is a meddler, however, who would try to talk our heir into bigger and better things – perhaps even forming his own clan. This proposal will not stand.

The year 1554 begins as the Sagara Clan convert to Christianity. What has become a possible rift between us has grown into a potentially poisonous relationship. Their diplomat ensures us that they still respect our treaty, but our guard is now up. If they break the bonds of our alliance we will show them no mercy. At some point I fear this will have to be dealt with.

Our friends from across the strait, the Mori Clan, have been attacked by Clan Besshu. Our Daimyo is in the former Shoni city and can lend a hand in this war, which would also allow us to get a foothold on the main island of Honshu, so this works out perfectly for the Shimazu. The Daimyo’s army now has bow cavalry and Yari Samurai in addition to Katana Samurai and archers.

As we cross the strait we receive word that another clan has destroyed Clan Mori. This is a serious turn of events as the Mori were a potentially strong ally in the region. If this is the Besshu, this could prove a more dangerous excursion that anticipated. Our list of allies grows thin.

As our army camps, the Besshu army attacks us in an ambush. Our Daimyo must take the field against the Besshu Daimyo in what could be a fight to decide the war. We should have scouted this region more closely, we are moving blind in foreign lands.

The enemy puts 850 men in the field to our 1,000. They have lesser troops in Yari Ashigaru and Yari Bowmen but also bring three regiments of cavalry, which are the general, his son and heir and a lesser general all with their horses. Additionally, reports are that their Yari carry great experience in battle.

The battleground is hilly, misty, and our troops take cover in the woods. As the horn sounds, the enemy generals all advance in what looks to be a suicide mission. They are charging straight at our Daimyo, trying to end this quickly. Our archers are at the ready. Our Daimyo orders our cavalry archers to sweep the right flank, drawing the Ashigaru out, peppering them with arrows and retreating out of range of their spears.

Our bowmen are ready along the edge of the forest and right when they begin to fire, the enemy generals sweep left – it was a feint. They are going after the cavalry archers. If they tie them up the Yari will skewer them. Immediately the cavalry archers are called back to our line, as our own Ashigariu and Katana Samurai emerge from the woods. 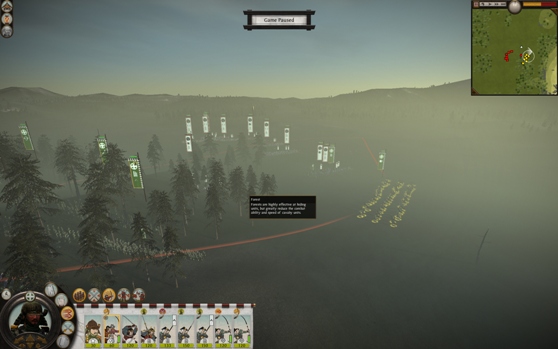 The fight is now bloody as katanas swing in the air, spears penetrate horse flesh and men die in great numbers. Our superior forces push them back, as the enemy general swings around to attempt to destroy our archers. Our Daimyo, however, has beaten them to the punch as his cavalry storm the back lines of the Besshu and crushes their bow regiments, forcing them to flee. The rest of the battle is a slaughter as dead Besshu litter the field. We are victorious, suffering the loss of two Yari Ashigaru regiments and half of a Yari Samurai regiment.

The Battle of Nagato is over.

The enemy was able to flee, however, and the general and his son still live. We must chase them down. The following season ends with their execution, which was only a matter of time. The Besshu stronghold is another season away and winter has arrived so we must turn back unless we face attrition in the cold.

But the Besshu are playing dirty.

Parked right in the middle of the strait which leads back to the safety of our province is a Besshu fleet – effectively blocking our escape route. The dogs! We must face the winter alone, and men will undoubtedly die. We will see the Besshu city burn to the ground for this. 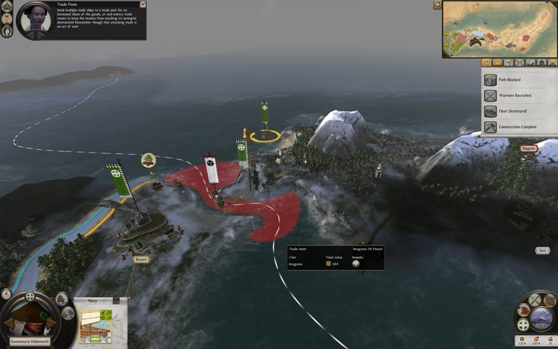 The following season, after losing many men to the cold, the Besshu offer us a peace treaty, which we spit on as our armies begin to mobilize for what will surely be a quick and decisive end to Clan Besshu.