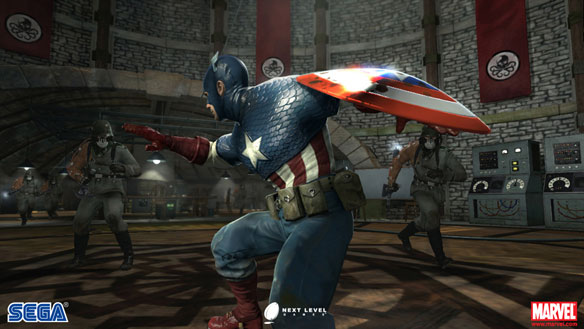 Sega today released the official fact sheet for its upcoming action game, Captain America: Super Soldier where you get to play as Cap and beat the crap out of a lot of nameless soldiers as well as Red Skull, Iron Cross and other people Cap doesn’t play well with on July 19th on every platform but the PC.

On with the PR!

Become Captain America™, the ultimate Super-Soldier, in the darkest days of World War II as you face the Red Skull and his army in this epic third-person action adventure.

Wield Captain America’s legendary shield to take out multiple enemies at once, deflect incoming fire back at your enemies, solve puzzles, and scale walls. Above all, hurl yourself shield-first into the fray, with the superior force of the world’s first Super-Soldier at your fingertips (as Captain America).

Engage in free-flowing combat and acrobatic platforming to infiltrate Hydra’s massive and mysterious castle complex and battle the infamous Iron Cross, the forces of Hydra, and a host of nefarious enemies serving the Red Skull in an all-new Captain America story and adventure.