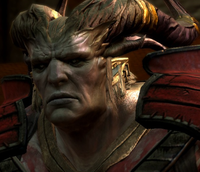 During the first few hours of Bioware’s controversial and divisive Dragon Age II, it is extremely easy to slip into a way of thinking about it that could blind you from the things that emerge from it that make it great. The central city of Kirkwall is strangely uninhabited despite a refugee crisis. Combat is almost too fast and feels terribly button-mashy at first. The much-loved origin stories from the first game are gone, and the player is locked into playing a specific character. Minor features are stripped away, and the fact that the game had a much shorter development period is all too obvious in a number of places, like those oft-mentioned repeating dungeons. When it comes down to it, it really should not have been called “Dragon Age II” at all, because it is not a continuation of the story of the Warden, although its narrative begins during the first game’s Blight and there are clear connections to that story. Casting it as a sequel created certain expectations that were not met, particularly since what Bioware has delivered is in some ways a very radical, unexpected kind of sequel. I came close to confusing “unexpected” with “disappointed” myself.

I found myself losing faith in the game after a honeymoon period. My issue was that it felt like I wasn’t really doing anything to move the story along, which I began to view as weak and entropic. My version of Garrett Hawke had fled to Kirkwall with his family to escape the Blight and wound up working for crooks to get into the overburdened city. It was an interesting and compelling setup, but ten hours into the game I was completing quests, meeting people, and exploring without a clear adversary or overarching “save the world” goal. I felt sort of lost, as if I didn’t really have a purpose. But then, I realized how completely different that felt from other roleplaying games.

Even in Mass Effect 2, the shadow of the Omega Relay hangs over the entire game. You know that the Reapers are the Big Bad. Lines are drawn. In Dragon Age II, there is no sign- even thirty hours into the game- that there even will be a Big Bad. The story reflects this, because as it progresses the narrative actually evolves around you. Choices made earlier in the game are like story seeds that bear fruit later on. Political struggle, ideological conflict, and personal vendettas are woven together to form a much richer, much more sophisticated story-web than anything I think I’ve ever seen attempted in a video roleplaying game. The game’s stories feel organic, emerging and unfolding rather than being told or directed. It is also a story that takes place over years of time, meaning that although it is not a continent-spanning epic of distance and scope, it is an epic of a specific place and of a specific era.

It’s not a save the world game. At least not yet, and I don’t think it will be. Events seem to be building to a head, and I sense that difficult decisions about where Hawke will cast his loyalty are to come.

Despite the smaller scope- it really is just about Kirkwall and its immediate environs- it is still also a story of specific characters, all with ambiguities, complexities, and intricate relationships both with Hawke and the various factions and events in the city. The writing is much sharper, tighter, and more is said with much less than in the first game. Although there’s no character as monumental as Shale, I’ve found that the companions as well as many of the NPCs (the Qunari Arishok in particular) have me completely riveted and interested in seeing how their stories intertwine with the other threads in the game. And man, am I glad that the silly gifting mechanic has been thrown out in favor of a better-integrated system of currying favor with your party members.

One little bit of character writing in particular really sort of blew me away, although it was very subtle. Aveline, among the earliest party members that joins up with Hawke, eventually rises to a position of power in Kirkwall. Through choices and dialogues I cultivated a long-term platonic friendship with her. She was kind of my right-hand woman, but I never had any romantic designs on her because Merrill, the klutzy elf girl caught my Garrett’s eye instead. I stopped in to visit Aveline, and she more or less asked me to help her get close to a City Guardsman she fancied. I actually felt the same “what about me” pang of jealousy that I probably would have felt in real life.

What followed was a quest wherein her inability to confess her love for this guy drew me in as a pawn and eventually I just laid it out to him, inadvertently embarrassing her. She was angry, he appeared to be professionally aggrieved, and I actually felt bad for trying to force the issue. It all ended well though, but later on she chastised me for selling her shield earlier in the game. Um, sorry about that!

That I’m writing so much about a minor romantic subplot in the game indicates how much the story and characters are the focus- not fiddly, nerd-pleasing mechanics and numbers tweaking. Call it “dumbing down” and blame the console gamers if you want, but the fact is that this is a game that is much closer to actual role playing than even the vaunted Baldur’s Gate games were. That being said, the mechanics present are essentially the same as in the first game, but with some much-needed polish and a lot of fat cut away. The result is that combat is fast, almost (but not quite) action-oriented, and skill trees are simpler and more direct in their content and effect. Tactical pausing and adjusting situational character tactics individually is still critical to winning key battles and although friendly fire is gone on the lower difficulty levels, I can’t say that I’ve missed it. I’ve found the combat more exciting and engaging, and the faster pace and slicker interface has not resulted in a loss of strategic depth.

Effectively, Bioware is asking a lot of tough questions about the RPG genre in this game, particularly in regard to what defines it and what it needs to cut loose in order to evolve into something more story-driven and less focused on dated, gamey mechanics. Most of the time, I think they’ve succeeded and looking at the game objectively I’ve not been disappointed or offended by anything that they’ve stripped away. If anything, I’ve enjoyed the game more than the first because it feels fresher, newer, and progressive instead of wallowing in the late 1990s glory days of Western CRPGs. It might bother some that every item doesn’t have a florid, purple prose name and I know many will be upset that companions have limited and character-specific upgrades to their armor. But in the latter’s case, it’s almost exactly the same limitation that any number of JRPGs have featured, including celebrated titles like Chrono Trigger and the Final Fantasy games.

Where the company’s daring proposition gets a little dicier is in the parts of the game where a shortened development schedule has apparently foreclosed on content and variety. Yes, some of the minor dungeons and even a couple of the major ones are exactly the same. What they’ve done is to reuse maps, sometimes sealing off areas that may be open in another map. The scenery, textures, and environments are exactly the same. At first, this is grating and it’s too obvious and it definitely feels like a lazy shortcut. But I found myself asking if it really mattered if I could turn left instead of right or if the walls looked different, or if I would rather that the game be fifteen hours long and not feature such a rich, textured narrative in favor of dungeon variety.

READ ALSO:  PlayStation Plus Sends in the Clouds

It’s a tough call, but I will say that being thirty hours in I haven’t really cared all that much when the dungeons have repeated. It is jarring because it’s too apparent that you’re in a familiar location. But the outcomes and events that transpire are so much more significant and interesting than worrying about a design element that is almost certainly borne out of logistical and economical shortage. They’re really no worse than any of the dungeons in an Elder Scrolls game once you look past the repetition.

This is what Dragon Age II is really up against- folks that are looking strictly at the surface mechanics or presentation and not digging into the things that really matter. Those who are playing the demo or even the first ten or fifteen hours and passing off their zero-score Metacritic user reviews will never even get to see the places where Bioware has done the most work in terms of pushing the CRPG envelope. For a lot of people, it obviously hasn’t worked but for those who understand that experimentation, streamlining, and evolution often precipitates mixed results, I think there is an amazing game here to discover, one that is better than the first game on almost all counts as long as you don’t expect it to carry forward its design principles and foci, which were already largely dated and antiquarian in 2009.

The next time I report in, I’ll be finished with the game and I’ll share some final thoughts as a post-mortem on it. At halftime, I’d list it among the best console RPGs I’ve ever played. Without reservation.

35 thoughts to “Dragon Age II in Review, Part I”