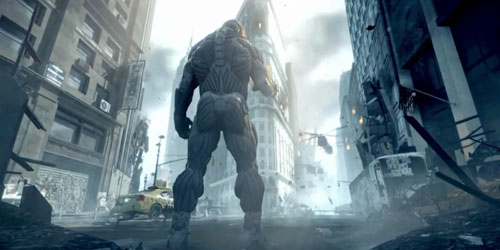 Crysis 2, Crytek’s follow-up to their 2007 graphics card-melter is both a technical achievement as well as an amazing piece of gameplay design that boasts a level of tactical and exploratory freedom uncommon among post-Call of Duty shooters. While playing through the game, I almost felt as if the German developers took out a sheet of paper, wrote “What’s Wrong with First Person Shooters Today” and made a checklist of things to avoid in their game and used that as a design document. The result is a truly spectacular example of the genre that may not always hit the level of perfection strived for or the level of innovation aimed at, but it remains a thrilling and forward-thinking game at a time when the genre is desperate need of new direction.

Ironically Crysis 2 moves forward by looking backward, offering a return to the free-roaming, more open-ended gameplay of earlier shooters, due most likely to the developer’s roots as a PC developer. Unlike the current shooter model which is focused on extremely rigid, linear progression with Hogan’s Alley-like shooting segments bookended by set pieces, quicktime events, or cutscenes, the game presents the player with a tactical situation and lets them decide how they want to approach it. At several points during the campaign, you’ll come across observation points and the suit’s inhuman, internal voice will announce that options are available. Flip on the tactical visor, and you can survey the situation, marking enemies on patrol or setting waypoints for optional objectives. These objectives are classified by their utility- “Snipe”, “Destroy”, “Avoid”, “Resupply”, and so forth.

A plan of attack might mean that you go into stealth mode and sneak around, using silenced weapons for a low-profile assault. Or you might tag a climbable ledge which leads to a mounted heavy machine gun. If you’re feeling tough you can toggle the Maximum Armor boost and go in with guns blazing. On a single playthrough, it’s entirely possible to completely miss areas of each section of the game simply by bypassing them based on your decisions.

This kind of freedom can be exhilarating. There was one point early in the game where I was trying to make it into this waterfront lab. I assumed that an invisible wall would stop me from jumping off a pier and swimming around to flank the guards. But I was able to do exactly that, after trying a couple of other unsuccessful approaches. Be warned that on the console version, at least, that the checkpointing can sometimes mean that you’ll have to replay ten or fifteen minute sections if your plan goes awry. It’s usually worth it though. The thrill of overcoming the odds and besting difficult situations feels empowering and is always exciting in a way that simply shooting bad guys is not.

The Nanosuit, with its upgradable abilities and super-human advantages, is key in creating this sense of freedom and power. Much like Arkham Asylum’s conveyance of empowerment and prowess, the suit makes the player feel like a total badass and learning to use its tools effectively is a chief gameplay concept. The abilities include some really neat concepts like a device that traces bullet paths so you can determine where an enemy is and a unit that tracks enemy walking paths. There are four upgrade categories with three selections each, and it’s entirely up to the player as to which items to purchase and equip throughout the game. The suit’s energy level is a constant reminder that power is not limitless and managing resources wisely is a critical directive.

Unlike other shooters where you may often feel like a pair of hands and a gun on a roller skate, in Crysis 2 the player is always aware of their presence in the world as a guy in a super-powered suit of armor. I’m reminded of Metroid Prime and how simple effects like the reflection of Samus’ face in the visor put the player squarely in the game as a participant and not an observer. The game never breaks the illusion- outside of a standard pause menu, all upgrading and cut scenes are presented from the player’s in-helmet viewpoint. This really sells the suit’s power as well as its impact on the game world particularly when the suit breaks down or control is taken away from the player.

As for the game world, there has never been a better depiction of New York City in gaming, period. This is also one of the major reasons why I am head over heels in love with this game, because I love Manhattan. No, they’ve not gone so far as to render a Duane Reade on every corner and I still can’t find a Ray’s anywhere, but Crytek has completely nailed the look, feel, and most importantly the scope of the city. The architecture, which mixes old with new, is dead on and I don’t know that I’ve ever played a game in an urban setting where I’ve felt like the buildings around me were literally skyscrapers built to scale. Parks, subways, churches, convenience stores, office buildings, and other locations provide more variety than you might expect.

As beautifully as New York is rendered, what is perhaps more amazing is how fabulously Crytek has destroyed it. The vistas of Armageddon are sometimes breathtaking, with city streets crumbling into subterranean tunnels and skyscrapers collapsing into areas you’ve just passed through. In one level, a multi-level freeway collapses around you leading into a spectacular firefight in a cloud of dust. I’ve been truly blown away time and time again by the sheer scale of the game. There is also a definite sense of size and place.

The work done with Cryengine 3 that enables all of this is truly remarkable, and reports that this is the best looking game yet might be hyperbolic, but they’re not that far from the truth. I don’t have an ultra-high end PC so I can’t comment on that version’s visuals, but I’m stunned at the results the team has accomplished on the aging 360 hardware. Metals gleam, light refracts, and water actually looks like water instead of a viscous gel for a change. Fire and smoke are photorealistic and completely 3D- a very arresting effect when you see a jet of flame pouring out of a broken gas line.

The game seems to run- and don’t quote me on this- around 24 FPS. That may cause some to panic, but bear in mind that feature films shot on film stock are 24 FPS. Crytek has wisely added a slight grain effect coupled with some judicious blurring and the result is actually a very filmic look. It may not be the extremely high resolution, crystalline sheen that a PC running full-bore might be able to produce, but its effective and it looks great on a 1080p television.

With that said, it is clear that compromises were made and you can practically hear the console’s GPU protesting during some sequences. Pop-in is a sometimes major issue. There was one point where a barrier popped in right in front of me, and there are other times when textures are very delayed in loading, thus breaking the game’s immersion. There are also some glitches, the most obvious occurring when enemies will caught in objects or sometimes walk straight through them.

As for the story, it’s somewhat confusing and not particularly great compared to other story-focused shooters but it’s also several cuts above the usual juvenile Bungie or Infinity Ward/Treyarch offerings. Enemies aren’t terribly diverse and it plows the same commandos/aliens plot that Half-Life and other games have mined to great success so it’s hardly groundbreaking in that regard. Despite its near-miss in the storytelling department, there is a compelling twist present given the events of the game and what happens to its central character. But truth told the concept of fighting through a ravaging Manhattan is sometimes enough to drive the uniformly excellent game play so it’s not a tremendous fault.

Multiplayer is outstanding. Just as the suit empowers the player in the campaign, it also imparts a sense of ability, agility, and prowess in the online game. It combines the more acrobatic, looser feel of Halo with the on-the-ground heft of Killzone but with the addition of tons of upgrades and unlocks that offer limitless loadout options. Game modes are fairly standard with objective-based options offering the best combination of action, teamwork, and strategy. I wasn’t impressed by the early multiplayer demos, but after playing the full version it has become my online shooter of choice. It’s just so well done, and the scoring and reward system is among the best on the market.

After the disaster that was Homefront, I was sure that I would be returning to Killzone 3 but after playing Crysis 2, my career in that game has been put on hiatus. Between the replayable and frequently stunning campaign gameplay and the longevity promised by the extremely fun multiplayer, it has become the top shooter on my stack of games edging out last year’s masterful Metro 2033 only by virtue of greater replayability. It’s made me wish that it was Crysis 3 that the punters will be scrambling for come November instead of whatever Call of Duty game comes next. But I’d really rather see Crytek take another couple of years to work and grace our next-generation consoles with the kind of future game that this one seems to point the way toward.