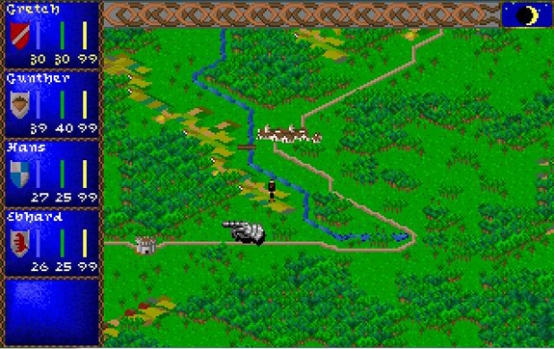 In last Thursday’s post about “realism in role-playing” a user asked the question, and I am paraphrasing,

“Bill, do you have any modern examples of your so-called perfect RPG?”

I sat there staring at that question and came to the answer: not really.

That forced my brainwaves to wander down another corridor to a door that read: ‘what game best represents the type of RPG you were yapping about?’

Again I sat there and all of the usual names popped in my head. The Baldur’s Gates, the KOTORs, Fallouts, The Witcher, Krondor, and classics like The Bard’s Tale, Ultima, even the truly classic Adventure Construction Set on the C-64. Pretty much the standard canon for a westernized RPG fan.

Then it hit me…

For a guy who was growing increasingly tired of Dungeons & Dragons and its over the top high fantasy style, two games helped redefine my thinking of what an RPG could be – one was the “pencil and paper” role-playing game Warhammer from Games Workshop, which at the time was far and away the greatest RPG of my generation (that and Cthulhu), and on the PC a game called Darklands from Microprose.

Darklands was released in the early 1990s; I was actually in college at the time and installed this monster on 16 3.5” disks and it ran a whopping 25 megs and I thought that was the biggest program on the planet (and it likely was close.)

If you never played this brilliant, yet admittedly terribly buggy game, let me lay out why this was such a revelation for me and also to help explain the style of game I was referring to in Thursday’s post.

Darklands was set in 15th century Germany – the real Germany, only in this game world all of the traditional German folklore written/spoken at the time was very real. This includes creatures like the hermit Schrat, Rock Gnomes, Dwarfs (not the Tolkien kind), Kobolds, Dire Wolves, and so on. There were evil men such as powerful robber knights and thieves, but the biggest “evil” in the game were witches, demons, cultists, and other humans who were lured to the side of, well, Satan basically.

There was no spell casting in this game. You could still perform “magical” feats but it was through alchemy (hurling potions) and divine intervention (prayer). You wouldn’t see a dude with a staff with an eagle’s head walk up and say some words as “chain lightning” flew from his fingers. Not that I have anything against chain lightning but the way in which “mages” cast spells in most fantasy games seems too…easy.

Another neat part of Darklands’ design and something that I felt was borrowed from Warhammer, was that the characters weren’t labeled generically as “fighter”, “warrior”, “mage” or “ranger”. When you think about it, how silly is that?

I never understood what the hell that even meant. The idea of being classified as a “mage” or a “warrior” is so generic and flat out boring. What do you DO?

In Warhammer I had characters who, before being thrust into the role of “adventurer” were nobles, pit fighters, herbalists, mercenaries, or town scribes. Maybe even a common footpad.

It just makes sense, doesn’t it?

Darklands was the same way with its character creation. You guided your PCs from birth to the day that they decide to leave the mundane life and become adventurers. But what they DID in life was very, very important. Maybe one was a lifelong soldier? Perhaps a student or a monk or a nun? (Remember religion is a big deal in this setting). Monks could speak Latin, soldiers started with weapon bonuses, nuns were solid with various Saints, etc. –and that’s a small sample.

In the end you started the game knowing more about your characters than you do in nearly all of the RPGs we play today.

The gameplay was a mix of several genres. You had the ‘choose your own adventure’ aspect – as there was a lot of reading in the game backdropped by lovely watercolor artwork. So for example when you were in a city you would be presented with several choices as to where you wanted to go. After choosing a destination either a new screen would pop up with more choices, or you might get attacked by thieves. But here’s another kicker – once you got powerful enough the thieves would notice this and decide that attacking you wasn’t too bright so they’d leave you be.

Wandering bands of thugs were a real problem in 15th century Europe, so this made perfect sense to me. You wouldn’t see an attack in broad daylight but once the sun went down it was a bad idea to wander – especially early in the game.

There was the open world map where you traveled around from city to city finding trouble to stir up, and unlike something like Oblivion – if you left your starting city you were going to die. No auto leveling here. It was tough out there in the wilds of Germany with all of the wolves and pagans running amuck and your merry band of a former monk, a nun, and a 40 year old ex-soldier wouldn’t last too long.

The combat portion which was pauseable real time which for 1992 was SO ahead of its time. Baldur’s Gate? Yep. It took a lot of ideas from Darklands.

You could even RETIRE your aging characters once they reached a certain age ala Pirates. “John, you’re just too damn old for this life. Back to the smithy with you.”

I miss this style of game a great deal. There were so many aspects of Darklands that hit a real sweet spot with me – “realistic” setting, low/grim fantasy, dangerous (extremely dangerous) combat that was built into the core design and not by adjusting difficulty level, and an open world style of play that allowed for a lot of freedom without feeling lost.

There have been various attempts to “remake” the old girl, and you can even grab the game from various abandon ware sites, but when I spoke of realism in role-playing this is the type of game I was talking about: combat that made sense wrapped up in a believable world where gutting a man on the street was murder, characters didn’t try to sleep with every party member, and being an adventurer and leaving your mundane life behind was reason enough to play.

To get a better sense of what this game was like watch this 10 minute clip. It brings back a lot of memories of late night adventuring and missed Sociology exams.