On Friday, when I started thinking back to the days of Darklands, a couple of other ideas skittered across my brain.

First, those of a different generation (younger people) likely have no idea how uncool videogames used to be. Today, videogames are as accepted by mainstream society as movies. In fact, I think you’re likely more of an outcast today if you don’t have a major console in your house.

If you are a younger gamer let me tell you – hoo boy that wasn’t always the case. In the 80s and into the 90s (until DOOM came along making it possible to shoot your friends in the face with a BFG) gaming was, quite simply, a pretty nerdy thing to be into. Even post-DOOM games didn’t get truly hip until graphics began to catch up with ideas and games became essentially rated R…

As much as I loved and adored an RPG like Darklands, it wasn’t something you’d bring up at the weekend college house party. “Hey did you know that I discovered a witch coven last night!” Lines like this would make non gamers look at you funny as they quickly sauntered over to the next group of people.

Today, a story about a Call of Duty match might make for accepted behavior.

“So I shot that fucker right in the face!”

I have always possessed the ability to blend in with pretty much every crowd. I played sports growing up, played sports games growing up and knew more about sports than most of my dad’s friends. I could tell you the starting lineup for the Cincinnati Reds in 1978. I was 6. I knew the bullpen, too.

Being able to talk swords and sorcery one minute, the history of the Roman Empire the next, and then slide into a deep discussion about why the DH is the work of Satan (which it is) has served me well all these years.

My other thought was that of the Gaming Tree.

We all have one – even young gamers have the beginnings of weak branches. We are the gamers we are today because of this tree. I grew up playing a variety of games on a variety of systems and platforms. My formative years were spent with the Commodore 64 playing fascinating games whose ideas were far ahead of the technology available.

Interestingly my tree is different than yours. Likely – very different, even if we come from similar backgrounds; we have platforms and specific games that shaped the gamers we are today. I never played Wasteland, for example. That’s front and center in Todd’s tree. I’m sure of it.

My gaming tree is missing a lot of stuff – and I stopped tracking it at the end of the 90s. I should add onto it to really finish it because in 1999 I bought a Dreamcast and it was the first console I owned since the Intellivision.

I’d love to see Danielle’s gaming tree, her being the Nintendo platform fan that she is. I was exclusively a PC gamer until the industry basically forced me to jump into the world of Dreamcasts (because of NFL 2K) and later the Xbox. But if there was a brilliant original PlayStation game I never played it. The games in my tree, it should also be noted, aren’t just “the best games I played on system X.” I played a hell of a lot more games than this, good games, too. But the games in my tree are the games which played a role in shaping the gamer I am today.

Omni Play sports showed me franchise mode in the late 80s; Front Page Sports expanded on it. MicroLeague Baseball showed me I didn’t need a joystick to love a baseball game. Utopia on the old Intellivision was basically the first “Civ” game. These games all had enormous influence on me.

If you are a gamer, if gaming is a big part of your life, the games in your tree are an important part of your history. As much as the books you loved and the movies you have watched umpteen times, your games are a big, big part of who you are – not only as a gamer but as a person.

It’s kind of neat when you look at it like that.

Here’s my tree, in its PC loving glory. 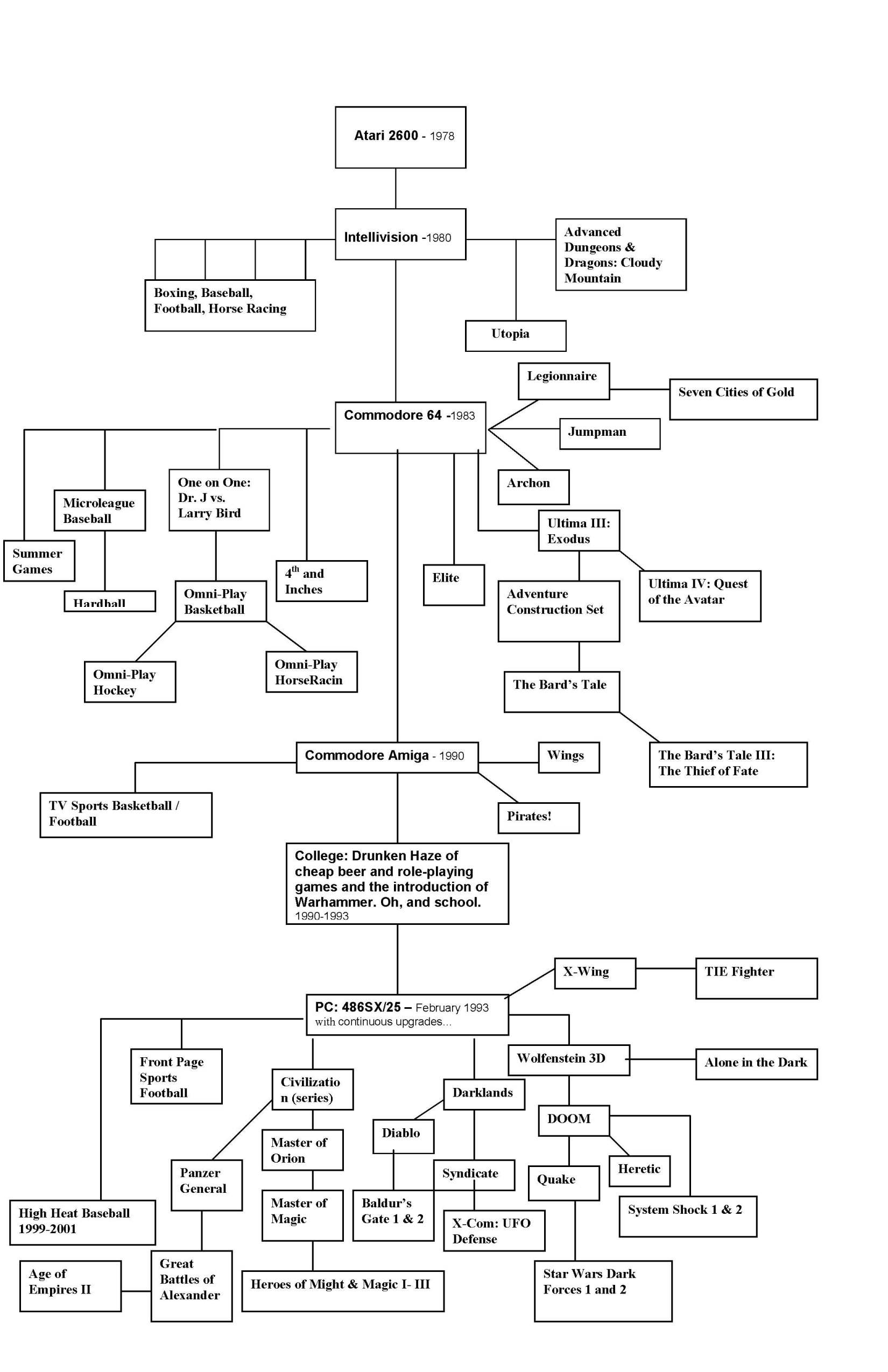