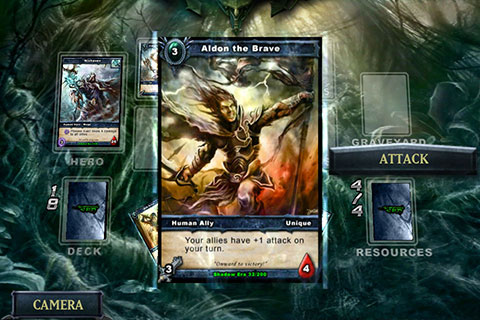 Collectible Card Game, I freely admit, are not my thing. I played Magic back in the day a bit (literally a dabbler) and even the modern spin on the CCG, the “Deckbuilding” game, is usually hit and miss with me. CCGs always seemed like insane money pits.

I have a friend with whom I play boardgames with on weekends who used to be a complete Magic nut job: entering tourneys, the works. He’s now playing a new online game that just launched for PC, Mac, iPhone, iPad, and Android that he’s enjoying a great deal called Shadow Era. It’s a collectible card battle game that is 100% free to play, at least for now and sounds like a nice airport/commute on the train time killer. As much as I dislike CCGs, CCGs on my PC / Android might be worth checking out.

If anyone tries this let me know. My schedule is full. Hmm maybe Barnes knows of this…

11 thoughts to “Shadow Era: Get Your CCG On”