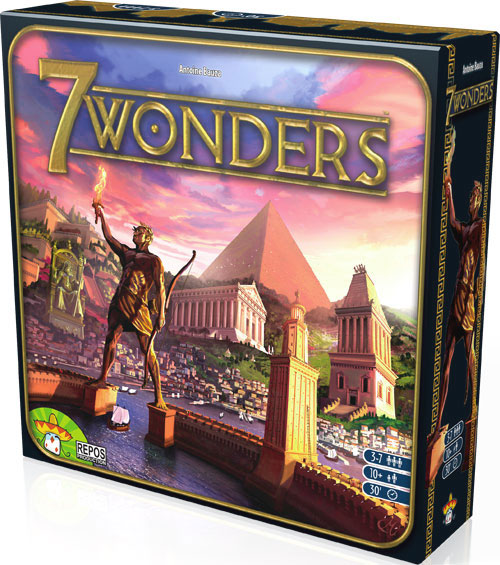 When it comes to games, be they of the digital, card, or cardboard variety, I am a sucker for ancient and medieval history. Slap on a picture of an ancient Greek holding an 8-foot spear, a war elephant, or a picture of a pretty castle and, for better or worse, I’ll at least pay attention.

The hugely popular deckbuilding game Dominion is a prime example of this. You are, supposedly, trying to build a medieval town or something when you play your cards. But in truth that game could be about baking a cake and it wouldn’t change anything. Just replace the “Bureaucrat” card with an “Icing” or “angel food” card and you’re good to go. Why does the Village give you extra plays or buys or whatever? Shrug. It just does. Go with it.

Not to pick on Dominion, a game that I enjoy in small doses, as there are a slew of games which use a generic medieval or ancient history backdrop for no other reason that to put an old guy on the cover of the box so people like me will look at it.

7 Wonders, one of the current “hot” games on the market, fits snuggly into this category of game – it’s technically about building one of the Seven Ancient Wonders of the world which is a really cool backdrop for any game, but it’s really about playing cards of various colors and earning points—in theory (and I have seen it first hand) you can win the game without building or even starting to build a Wonder at all…

And yet, I will never turn down a game of 7 Wonders…

I received 7 Wonders as a Christmas present, and bought it without consulting Barnes first; it’s something he’s still mad about, but I have played dozens of games since and it has turned into one of the best 30 minute filler games in my ever expanding boardgame collection.

Here’s how it works: 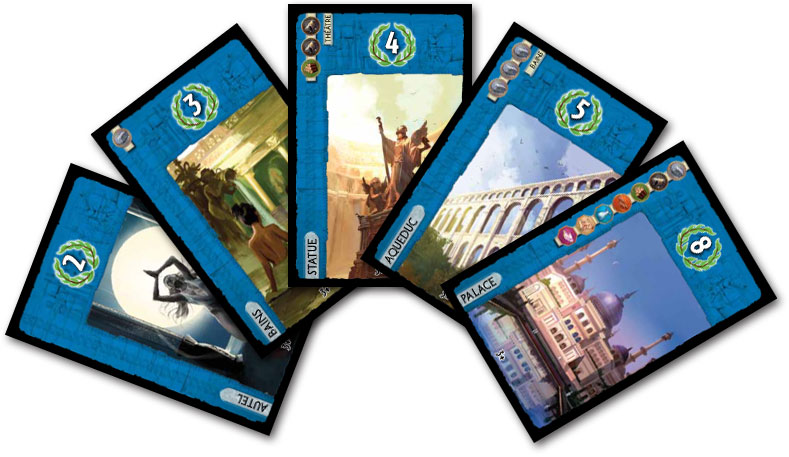 Obviously the cards all do various things from scoring points to building up military strength and the cards you play are all kept in your display area for all to see; each type of card serves a very specific role and it’s up to you to decide how best to play the hand you are dealt. The kicker is that after you play your first card you then give the rest of your hand to the player next to you so every turn you will receive a set of new cards until the initial seven cards are gone, at which time the first Age is over and seven Age II cards are dealt and the game continues as such. After Age III the game ends and points are tallied.

Each card play is tremendously meaningful. There are no throwaway rounds. If you make a mistake and play the wrong card at the wrong time it can cripple your game if you manage to give the player sitting next to you a card he/she obviously needs. You have some terribly tough decisions to make, particularly in the second and third Ages. Do you waste a card to build a stage of your Wonder? Do you stick to your plan and play nothing but science cards? Did you screw up and not play enough resource cards in the first Age? You better have some money then to buy resources from your neighbors.

I love how interactive the game is, even though the level of interaction is a bit obfuscated. The players sitting to your immediate left and right are in effect both mandatory trading partners and bitter enemies. Let’s say you need ore to build a structure (i.e. play a certain play a card). The building costs two ore and you only have one in play. Todd is sitting next to you and he has ore in his display – if you pay him two gold he must allow you to use that ore to build whatever you need. (Todd keeps the ore for future plays, cards are never “used” and removed, but such trading is not optional; you can’t refuse to trade.)

So knowing what the players next to you are doing is extremely important when planning your strategy. On the flip side, at the end of each Age attacks are carried out and, yep, the players next to you are the targets and vice versa and this is where the military cards come into play and points are earned for crushing your enemies and you can even lose points for getting mauled. (Battles are easily calculated by the number of attack symbols you have in play.)

I love the fact that I’m simply not just staring at my play area without a care in the world what is going on around me, which is a common issue I have with games that use player mats.

But what of the Seven Ancient Wonders?

They’re a special part of the game and each Wonder offers up various bonuses and powers. For example, the Pyramids are simply victory point machines. Each time you build a stage of your Pyramid (there are three in all) you earn points. The Temple of Artemis provides money and points after each completed stage. The Mausoleum of Halicarnassus allows you to snatch up and play discarded cards, but again you need to build stages in order to do it. To build each stage of the Wonder you need the necessary resources in play (and/or acquired via trading) and then you need to effectively waste a turn and tuck a card under your player mat signifying that you are using it to build the Wonder.

It’s yet another tricky decision that is all about timing and picking the right card to dunk.

I have seen various strategies work in 7 Wonders: going military and crushing your neighbors, trying to corner the market on green science cards which can lead to huge end game points or complete disaster, hoarding blue cards and getting a lot of free upgrades along the way, using Age III guilds to maximum efficiency, etc. It’s the type of game you can play in 30-45 minutes between longer games or you can make a night of it and play this several times in one sitting.

My biggest complaint is that even though it technically supports seven players it really hits a sweet spot with three and with no more than four. This is a point of contention with 7 Wonders players but when you have more than three players there will be players to which you have no contact with throughout the entire game. If we’re playing a seven player game and I’m sitting across the table from you with several people between us, what I do has very little impact on you; we’re never going to be in direct conflict (and we can’t trade).

The other complaint I hear from those new to the game is that it’s very hard to plan a strategy and even after winning people aren’t quite sure how or why they won. It’s a fair complaint but after repeated plays basic ideas start to come to light; even so it’s not a brain burning card game.

7 Wonders scratches a specific itch. It’s fast, easy to learn, and feels complete right out of the box and avoids the weird lingo and abstraction of a game like Innovation and doesn’t require multiple expansions to keep it fresh. At least not yet.

3 thoughts to “7 Wonders Review: Pretty Cards in the Ancient World”