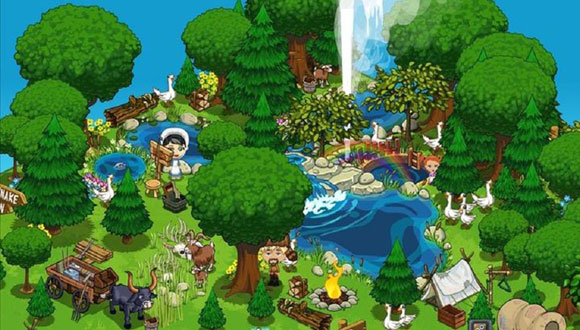 This is a few days old and I missed it when it went live back on the 15th, but in case you missed it as well, Gamasutra has a revealing interview with Brian Reynolds and Bruce Shelley, two strategy gaming icons, about the hows and the whys of their joining Zynga (Shelley is more a consultant) to develop social games on Facebook. Say what you will about that, but Frontiersville made money and has or had a user base of well over 60 million people. Million with an M. At what point does the idea of “social games on Facebook” not cause some gamers to make “that face” and chuckle? These games aren’t going away, folks. Brian Reynolds is a great guy to talk to–about as laid back as any “name” designer you are likely to meet.

Fun fact: When Reynolds was at Big Huge Games, developing Rise of Legends, I was at E3 that year covering the show and scored a Q&A with Brian inside this makeshift kiosk. Tom Chick and I were there for GameSpy and we sat at this little table and Brian started riffing about all kinds of stuff. Sid, Civ, Alpha Centauri, Rise of Nations, design ideas, etc. Tom and I were all ears and we just started talking games. It was great. So we’re done talking and I ask Tom “So did you get all that?” Tom says, “Wait, I thought you were recording it?” I had that deer-in-headlight look.

“Hey Brian you can do that again?” Much laughter. He didn’t do it again. We are, if anything, strictly professionals.

A taste from the Q&A:

What is it about the Sid Meier school of design that seems to meld so well with the social games space?

Brian Reynolds: So I think it’s partially the fact that Sid created a system of making games where the core of it was rapid prototyping, and he was the best at it, ever. You would say ‘firemen’, and he would — two weeks later — have a game where you’d be like going down poles and pointing hoses at stuff and there’d be fire engines. So he could kind of make a game out of anything and get the core of it up running really fast, and then you play it and you revise it, and you play it and revise it.