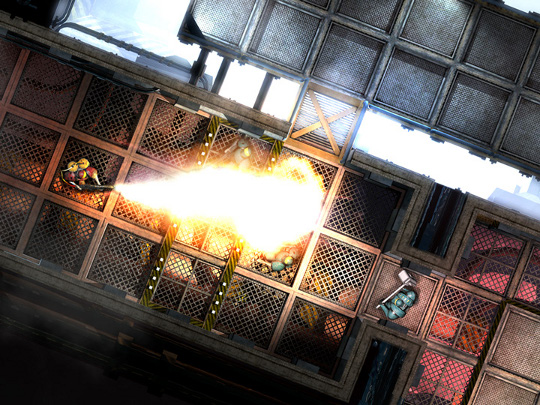 If you listen to the podcast at all, you know I picked up an iPad 2 a couple weeks ago. It was a real show of dedication on my part that involved falling asleep on the couch at 8:30 one night, waking up at 5:30 and thinking, “Hell with it, let’s hit the Apple store.” I got in line (#18) at 6:30, waited an hour in the cold (not knowing if any were in stock), waited another hour in the mall, and walked out with a 32GB Wi-Fi only white iPad 2. (I wanted the black bezel one, but wasn’t about to be that picky.) Score one for me!

In the weeks I’ve had it (love it, btw) I’ve only tried out a couple games, but the first one to catch my eye as worth writing about here is called Hunters HD: Episode One. It’s a squad-based, turn-based strategy game, from British developer Rodeo Games, that’s got a bit of an X-COM gameplay vibe in a setting that evokes the Aliens movies (sans actual Aliens). Corporations rule the day and your team of ultimate bad asses make their hay by taking on corporate contracts to do all sorts of things that involve guns and killing…

It’s really quite a beautiful marriage of premise and mechanics. You can rename your squad and your squaddies. You start out with five troopers, but can pay money to recruit (purchase) more as you get deeper into the game. Each trooper can be outfitted with various classes of armor: Light, Medium, and Heavy. The heavier the armor the fewer movement points the trooper has. (The range appears to be 5 points down to 3.) There are various categories of weapons, each with their own range, accuracy, and critical hit ratings. Some of them take more action points to fire than others. The weapon types range from SMGs, to shotties, to assault and sniper rifles, and RPGs (which I haven’t tried). When you level your boys up to Level IV (I’m not quite there yet), you unlock other side equipment you can use, like health kits. Also, you can reserve movement points such that the Hunter is able to fire as soon as an enemy enters his field of fire. This is all very X-COM and it works incredibly well in the game. It’s perfect for a touch-interface.

As you level up your Hunters, at specific levels they get an extra skill point you can use to enhance their abilities. There are team-based leadership skills (a bonus to your team’s criticals, armor, etc.), agility, damage, and health skills. It looks like it maxes out at three bonus skill points used on skills of increasing power. I love the limited use of skill points, which lets you really differentiate how you use your Hunters in combat.

The only disappointing angle so far is that there really isn’t much range to the gameplay. There’s a handful of different environment types and the mission maps themselves appear to vary a fair amount, but I’ve only seen about five or six different mission types (rescue the scientist, destroy/protect the generators, take out the enemy squad, etc.), and even within those types the encounters don’t really play out all that differently from each other.

The Episode One moniker evokes the notion that you’re playing out some kind of story, but if there’s a story here I haven’t gotten it yet. You have a handful of replayable missions made available to you over a real time period of 24 hours. You pick a mission, assign your squad, and do the mission. There’s no sense of story to it at all. You don’t have specific corporations you can work for or try to work against. Success or failure doesn’t appear to help or hurt your squad’s reputation. It leaves a very real sense of potential unrealized on this front, but maybe that’s a lot to expect from an iOS game?

As for the AI, it does look exploitable. I’m not going to call it bad. It can and has caught me off guard with some frequency. But there are also times when you walk into a room to see an enemy turned and facing the wall. Maybe he’s in time out? He’ll react if you shoot him, but if you just walk back out again he’ll stay there, allowing you to more carefully position your Hunters and plan your assault. And I can’t say I’ve seen an enemy squad trying anything particularly advanced, like taking the long way around a map to outflank and assault you. They also tend to make illogical target selections. Maybe there’s a threat assessment factor I’m not seeing, but when they attack one of my guys with full armor while the guy next to him is down to just his health (no effective armor left), you have to wonder. That said, I have seen them use tag-team tactics to maximize damage and they do a respectable job of putting themsleves in spots where, if you’re not careful, they can flat out unload on you. All in all, I think it does a fair job, but I’m also still just getting used to the overall strategies in play.

Given that it’s a free initial download, this is a game that’s well worth checking out. If you want to play your squaddies past Level 2, you’ll need to fork up ($7, I think) for the full version, which I consider a very fair price for what you get. (It is a good looking game.) Hopefully Rodeo Games keeps working on it and adds a few more layers because the core they’ve got here is extremely promising.

4 thoughts to “Hunters: Episode One Impressions”