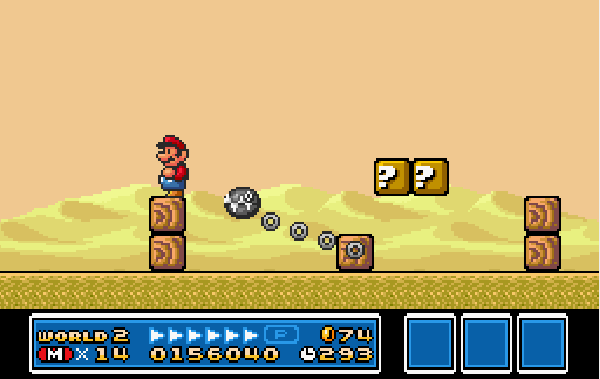 Over at Gamasutra, expert blogger Radek Koncewicz has been writing a fantastic series on game design lessons garnered from Super Mario bros. 3. He takes well-remembered moments and elements in stages, commenting on all of the awesome little elements that make the game the perfect “how-to” guide for game developers.

Partially inspired by that, a close friend and I decided to embark upon a magical Mario tour, playing through Super Mario bros 2 and 3, and then whipping out New Super Mario bros. to see how it compared.

After the warm fuzzies of nostalgia wore off, I found myself analyzing all of the little moments and design decisions present in the levels, many of which Koncewicz mentions in his article. It was quite educational. In fact, I kept thinking about the old story about how Orson Welles learned to direct films. When asked how he prepared to helm Citizen Kane, he mentioned watching John Ford’s airtight Stagecoach 40 times. He even called it his “movie textbook”.

I think that’s how anyone on earth interested in making a platformer should approach things – Mario needs to be your videogame textbook. Play Mario 3 until your fingers bleed. Take notes. Learn all the lessons about the importance of feedback to the player, tight controls, effective signposting, and rewarding exploration. Then and only then, should you start thinking about making a new title.

We played through a fair chunk of Mario 2 before we actually tired of it. It was weird – when we were young, we played the snot out of that game. It’s also objectively a good deal easier than 3. But, try as we might, we just couldn’t get into the groove, and after a trip through a favorite stage (4-2, you know, with the whales!), we moved on to 3.

READ ALSO:  Egypt on Your iPad

Did we ever. We spent just shy of 11 hours (across one night and one morning) digging through old, trippy Mario’s many treasures. This game is from 1990 – it’s ancient by gaming standards – and still insanely fun to play. Unlike today’s obsessive stat tracking and achievement whoring and constant leveling and tendency to “reward” players with little knickknacks along the way, this is old-school gameplay-first design. Finding secrets (and remembering where they are 21 years later) is genuinely exciting, and the wonderful variety of the various worlds and stages keeps things fun and fresh even though you need to play through certain stages twenty times.

Even this – the old-school challenge – contributes to the fun. We cackled at our many (many!) deaths, starting right up again each time. We passed the controller just like we did when we were seven.

Part of the reason we spent so much more time on 3 has to be its more forgiving continue system. We screwed up time and time again, but at least here we could start over from the same world, instead of getting knocked back to 1-1.

Of course, New Super Mario bros. Wii has an actual save system, along with 2009 era amenities. It was very cool to play the “retro-styled” modern game just after a hardcore session with the real deal. It’s far more chaotic – and not just because there’s more than one player on the screen. The feel is a bit more slippery, and there just seem to be more moving parts. Finally, and perhaps most sadly, the funkiness and quirkiness of the old school games have given way to the plastic-looking cuteness of the newer games.

Of course, we still couldn’t put it down.

2 thoughts to “Retro game diary: learning from the Mario masters”