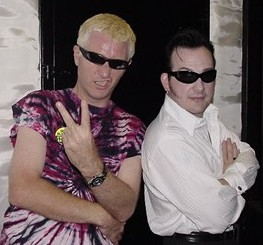 Pictured are two of punk rock’s elder statesmen, Captain Sensible and Dave Vanian. These guys along with Brian James and Rat Scabies started a band in London back in 1976, released the first 45 of the English era of punk rock (“New Rose”), and went on to record many great singles and records covering ground ranging from MC5-influenced stun-rock to psychedelic goth to more recent rockabilly-styled efforts. And now, according to a report over at Kotaku, these gentlemen are going to be contributing to Akira Yamaoka’s soundtrack to the upcoming Goichi Suda/Shinji Mikami game Shadows of the Damned.

Now, I know this is the second NoHS news item about this game today, but indulge me. I’m very excited about this title, and I’m thrilled that the promises Suda and Mikami about it being a punk rock horror game are validated by bringing The Damned on board. Smash it up, yeah!

One thought to “Shadows of the Damned to feature The Damned”