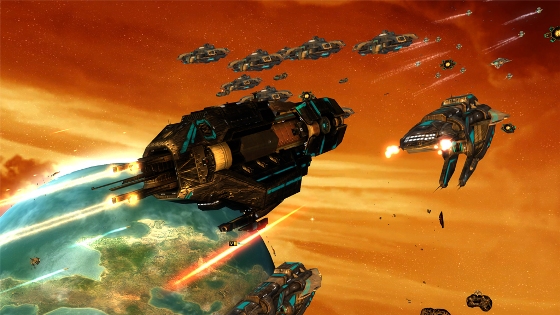 ‘This new bundle pack includes the original Sins of a Solar Empire, plus the Entrenchment and Diplomacy expansions.’

Head over to the Impulse store for more details but if you never got around to playing this one — $20. That’s a great deal.

Sins isn’t finished either, as the Rebellion expansion should be out soon (Q4 2011) which offers new factions, ships, victory conditions and more.

Now — there is a catch here. The Rebellion expansion runs $40. If you buy Trinity and then upgrade that’s a bit pricey, whereas if you wait for Rebellion…you’re saving $20. (It’s a standalone expansion) If you want to play Sins NOW — get this Trinity deal. If you have some patience and don’t mind waiting, Rebellion for $40 might be the way to go. Your dough, your call.

One thought to “Sins of a Solar Empire – Trinity Easter Sale”