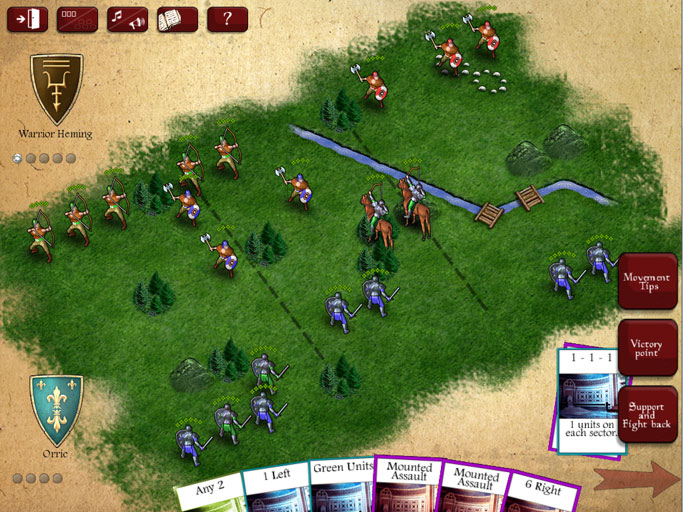 Can you copyright a game mechanic or a game system?

Fantasy Flight Games thinks so. For those unfamiliar with the tawdry world of boardgames–

Richard Borg created a game system called Commands and Colors. He has used this system with colored units, cards, and board sections to great success in games such as Commands & Colors: Ancients and its numerous expansions (which I own and love), Memoir ’44 (which I can’t stand), Battle Cry, a Civil War game which I never played, and the highly popular BattleLore and its numerous expansions which took the C&C idea and created a terribly boring and generic fantasy world around it. FFG acquired the rights to BattleLore and made a Game of Thrones version of it which was decent enough. Even Barnes sort of liked it.

C&C: Ancients remains the king of this genre, for my money. And it cost a hell of a lot of my money to buy all of the add ons.

So anyway, this iPad thing. It’s proving popular, eh? Well, a small outfit called Puffin Software took the C&C design idea, created a game called Viking Lords around it and slapped it up for sale for the iPad–which you can buy right now in the App Store. Puffin actually approached FFG about making a BLore game and FFG seemingly ignored them.

From what I can tell there is no use of anything specifically related to BattleLore or C&C outside of the game’s mechanics, which are clearly “borrowed” (read: stolen) from C&C. Colored units, card play which allows you to move units in a certain area, etc.

READ ALSO:  EA States Origin not to be EA Exclusive

Fantasy Flight is none too pleased.

You can read about all of this here — as a user on Boardgamegeek interviewed Johannes Päivinen of Puffin Software and when asked about how some people are “upset” that Viking Lords uses what is essentially the C&C mechanics, Päivinen responds with: “Get over it.” He’s basically saying that you can’t copyright a game mechanic.

That apparently irked FFG’s Christian Petersen who then jumped in the thread waving legal documents.

I have no idea if FFG has a leg to stand on, but I’d like to find out. How many computer and console games do this? Borrowing or outright stealing a game mechanic is…well damn it’s just how we do things, isn’t it? Even boardgames — we see games released all the time that are clearly “inspired” by Game X and from what I can tell Viking Lords takes a design idea and builds its own unique game around it.

The end game, for me anyway, is that I’m now off to buy Viking Lords.

And — if FFG would wake up and smell the cash flow, the company would start cranking out iPad versions (and not just announce them only to see them vanish into development ether) of their games because people would buy them over a knock off any day.

Or they could spend money going to court.