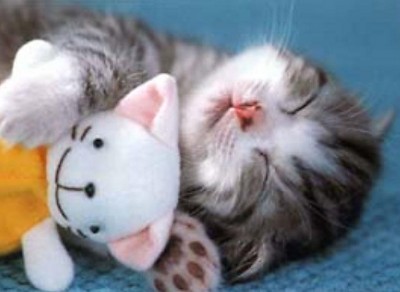 I want you to know from the outset, this is a Very Serious Post (sort of). I’m sure the picture of a kitten with a stuffed animal does not imply seriousness, but I assure you, that kitten is quite sincere. Wake him at your peril. More to the point, there’s no way I’m putting a picture of a spider on this blog. Ever. If I ever see one here I’ll go in and delete it. Period. So when I say the following, I’m not screwing around…

ENOUGH WITH THE GODDAM SPIDERS ALREADY!

If you hadn’t already guessed, I’m one of many poor sods out there who have fallen pray to the world’s most common phobia: Arachnophobia. It’s not merely a fear of spiders. Oh no. It’s a fear of creatures with eight legs, bulbous bodies, multitudes of eyes, and poison soaked fangs. They will drop down from above when you least expect it. Hide in your shoes, sheets, and clothes. Oh and there’s the whole sticky web thing where they entrap and devour creatures without mercy or hope for escape.

Yes, I know. Few people actually like spiders or would want one crawling on them. This is different. This is not dislike. This is irrational fear. This is me growing tense and uncomfortable just writing that last paragraph describing a spider’s nastier features. I don’t watch the Shelob scenes in Return of the King. My mom recently sent me an article clipping about all the sciency things being done with spiders. I didn’t read it until I cut out the picture of the spider on the first page. The only thing that gets me through a real life encounter is the fact that my rational mind knows 99% of spiders I encounter in the midwest aren’t A) poisonous to me or B) very big. My distinct size advantage does help mitigate the terror. Also, I don’t want my kids to see me scream and flee the room. I have a reputation as an authority figure to uphold. But even though I’ll walk up to a spider and smash it with a shoe, that doesn’t mean I’m not suppressing a panic attack as my mind fills with images of it leaping at me at the last possible second fangs glistening with… gyuh…

As you might imagine, as an RPG guy, this poses a bit of a problem for me because every frigg’n fantasy RPG developer on Earth seems to think spiders are a necessary part of the beastiary. Yes, I realize a spider won’t leap off a page or out of my computer screen. Again I point out phobias are not about rationality. It doesn’t matter what can actually happen. It only matters what my mind can imagine and I have a good goddam imagination. Now, back in the day this wasn’t the end of the world because computer graphics could only do so much to render a spider. Stilted polygons and muddled colors can only evoke so much. The fine details that fill my mind with dread were notably absent and even if they were relatively large relative to my onscreen avatar, I still had my real-life size advantage keeping the fear in check. With each passing generation of games, however, the playing field tilts further and further away from me.

Dragon Age 2? I’m not kidding when I say that were Casual mode not an option and were my party members not capable of fighting for themselves, I would have struggled to finish that game. Bioware loves them some spiders. The “little” ones made me uncomfortable, but I managed. The three or four ubers in the game? The ones that take up every last inch of my 22″ display? What the fuck* are you people thinking!?!?!? These fucking** things are FURRY for the love of Christ!

Were I an animator at Bioware and they asked me to design that model I’d have to quit. There is no way. And I know I’m not alone in this because there is forum thread after forum thread of people talking about how they’re struggling to play games with spiders of this magnitude. There’s even a DA2 mod that turns them into Mabari. Genius.

So as my anticipation grows for Skyrim and Witcher 2, two games that look to push some serious graphical detail, I can only stop and wonder just why they feel it necessary to use this unparalleled power for pure evil. I mean it: Evil.

Not the Diet Coke of Evil: 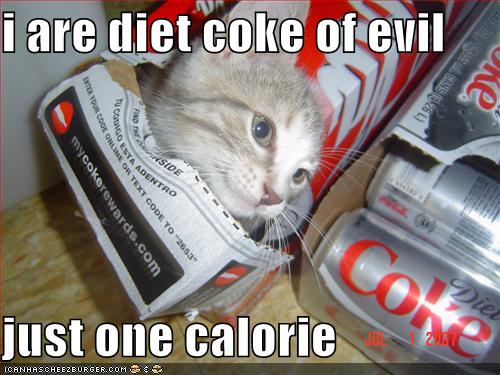 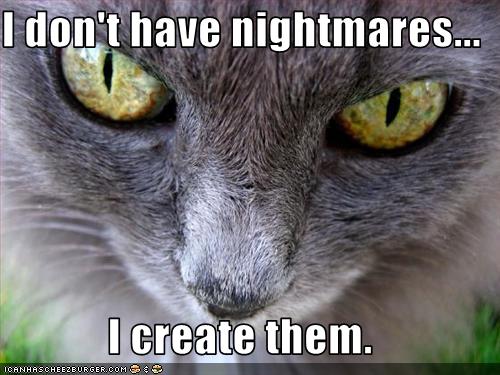 Last month Rock, Paper, Shotgun threw up some Skyrim screenshots that included a battle scene with a spider that puts the abomination in DA2 to shame. How am I supposed to win that fight? Can I finish this game if I run from every last one of these things I see? And today I’m back on RPS and they’re talking about 12 things they like about their preview build of Witcher 2 and I read this:

Giant spiders, meanwhile, will keep showing up in droves unless you find a way to lure out and murder their queens.

Um. No. Not gonna happen. Not ever fucking*** going to happen.

Okay, I’ll admit there’s an element here that is a little tongue and cheek. And I don’t think my own personal phobia should be driving game design for multi-million dollar development projects. But here are the facts. Phobias, whatever their cause are real and do cause genuine terror. Given that Arachnophobia is the single most prevalent phobia in the world, at this point it borders on being irresponsible using the graphical horsepower of today’s machines to exacerbate that fear by rendering these nightmare visions into all but photo-realistic life. It’s time, guys, to retire the giant spider. It’s fantasy. Make up something else. Don’t do it for me. Do it because… well, actually, just doing it for me is reason enough in my book.

*Do you know the last time I dropped an F-bomb in a post on this site? Pretty sure this is my first. I’m not messing around here.
**No, seriously. Me dropping an F-bomb in a post means we’re at DefCon 1.
***I will burn the world to a cinder and all of you with it before I kite a spider queen.

39 thoughts to “It’s Time to Retire the Giant Spider”