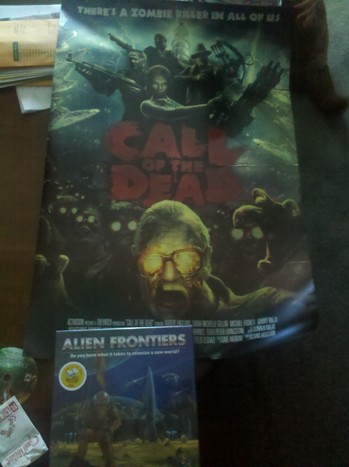 Today the UPS and FedEx man delivered “Cool Stuff” to my doorstep. I get stuff like this sent here all the time. It’s the publsiher’s way of saying, “Love ya!”

Fun fact: I still won’t get a copy of Prototype 2 in time for a launch day review. But I get the jacket. And, truth be told the idea of being a billboard for a videogame…yeah, that’s unlikely. I’ll give the jacket to a nephew. “Here kid, knock yourself out and don’t play this game, it’s rated M. Your dad will kill me and I won’t be invited back to the reunion. On second thought…
”
Below is a picture of what showed today. I took the photo with my phone this afternoon after picking my daughter up from school. (Note the tiny hands in the upper part of the photo holding the poster…) This is a poster of Treyarch’s Black Ops Escalation Zombie mode: Call of the Dead. The logo even feels like dried blood. Must admit, this is better than a jacket.

“This is Treyarch’s tribute to the legendary George Romero, who truly defined the zombie genre and whose incredible work has been such an inspiration to our team,” says Dave Anthony, Call of Duty: Black Ops Director. “It was an absolute honor to work with such an amazing and talented cast whose passion and energy brought their characters instantly to life. Fans are going to love this.”

The poster is admittedly cool and Ashley wants to put it in her room.

This is a terrible idea. Like all of the free stuff that shows up, I’ll give it to someone. (I keep the cash. I kid! I kid!)

Hmm do I smell NHS contest?

The best part of this photo: my brand new copy of the recently reprinted and still in shrinkwrap ALIEN FRONTIERS!!!! Woo hoo!