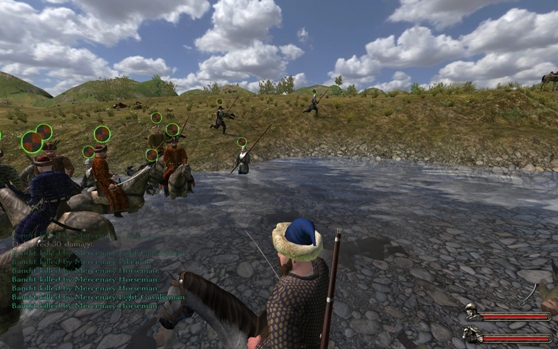 Quick to issue a fix for troops upgrades, Taleworlds has released a 1.139 patch for With Fire and Sword. This update does the following:

Version 1.139 Change log
– Troops can now upgrade properly.
– Fixed bug with grenades exploding at wrong location.
– Squad size limitation bug is fixed for multiplayer.
– An update is made for preventing graphics glitch on some ATI cards.
– Several text corrections for all languages.
– Scene fixes mainly on the custom battles and village/town scenes.
– Fixed a quest bug with persuading Obuhovich.
– AI behavior changed so that musketeer troops can now close up on the enemy properly.

As annoying as bugs are, it’s made less so when a company realized it goofed and is quick to issue an update. But now…I think I have to start a brand new game with the new patch in order to properly review it. I spent most of the day yesterday playing M&M Warband so as to get a feel for how the games differ. Hello Niklas V! If this patch fixes the upgrade bug as advertised, I think the two games compliment each other fairly well.

But they *are* different in many ways.

In Warband you get: more terrain types from desert to grassland where in WF&S you get…grassland, a wider assortment of troop types (at least in appearance), tournaments, female player characters, you can get married, faster combat from what I can tell, and the ability to rule a kingdom. Plus all of the incredible mod work. There is a Britannia mod with Picts, Jutes, and Saxons and the rest of the gang that is unreal cool. Total Bill Wheelhouse stuff. And you can make a case that there are mods out there that do a lot of what WF&S is trying to do or at the very least alters gameplay so much as to make it a totally new experience.

With Fire and Sword has: Historical post Wallenstein Thirty Years War setting, improvements to the general interface, you can go to market and other things in both cities and castles, you can’t hire farmers from villages to join your army you have to buy troops in taverns and camps, mercenary camps for buying troops and outfitting them with better EQ, various firearms, universities and academy and other training centers, and storylines for each faction which will take a while to get to, and the ability to make a lot of money via caravans.

If you go to the Taleworlds forum you are going to see Warband fans carrying Forum Pitchforks ready to burn the company to the ground for somehow tarnishing the M&B name with this game. That’s a bit of a reach. “I probably wont buy another Paradox or Taleworlds game ever again!” Come on…

From what I have seen after spending about 17 hrs with WF&S–this is not Warband with historical figures + guns. A lot of fans wanted that, I think. There are things in this game that you won’t find in Warband but the issue many are having is the opposite: there are features in Warband that are absent in the new game which is leaving a lot of longtime fans, well, rather pissy.

One thought to “Mount & Blade: With Fire and Sword Patch”