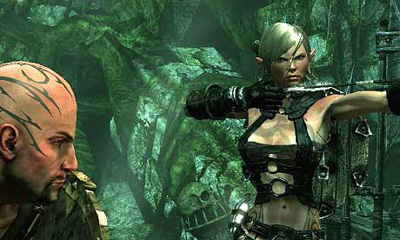 Welcome to the Memorial Day edition of Calendar Man which means I’m keeping this brief so that I can go back to having the day off. Don’t worry though, it’s not like I’m doing anything exciting. I’m going to buy a new fridge for the basement. Woo, extra fridge space, woo!

On to the games!

New Releases
Back in the day, the day being some time last year, I was supposed to review Duke Nukem: Critical Mass for the DS but it never came out. The Duke Nukem powers that be must have cleared some time off of their schedule to get all Duke Nukem games out and available as this side scroller is finally releasing. Groovy.

The 3DS portable fighter buffet continues with BlazBlue Continuum Shift II. This time there’s a PSP release too, so yay for PSP owners.

The Sims 3: Generations has fun for all Sim ages. Grandparents, teenagers, immature frat boys, they’re all here. Inter-generational hijinks have never been so exciting!

Last but not least, Hunted: The Demon’s Forge is out, bringing a wealth of co-op monster battling. I hope that it’s good, as Daggerdale is lacking in the co-op department, unless you consider running into repeated bugs your idea of a good time with co-op.

I know that these aren’t games, but new albums from Death Cab for Cutie and Eddie Vedder drop this week so my musical conscience has informed me that I have to tell you. I’m sure Bill would hate both of them, being artists that released music after 1979.

Steam – Steam has a bunch of stuff on sale including Frozen Synapse and Shogun 2. Well worth a look-see.

Impulse – Impulse also has Frozen Synapse on sale as well as Dawn of War II: Retribution. Also worth a look-see.