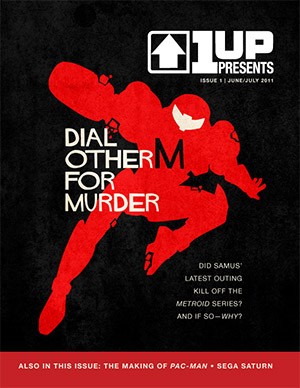 I don’t know about any of you, but I’m a print magazine fiend. Don’t get me wrong, I live and breath in the online world, it’s the only way I’ll ever get my news, and it’s frankly where I read the majority of my gaming content. But there is something special about a really GOOD game magazine – the exhaustively researched features, the gorgeous layouts, the art itself – I’m a big fan.

So, I got excited when I heard the news that the folks I consider to be the very best of 1Up.com will begin releasing a print publication. Dubbed 1Up Presents, it looks to be the pretty, feature-rich, thoughtful sort of publication I can’t wait to get my grubby hands all over, particularly because a number of features in the first issue focus on Metroid: Other M and its complicated reception.

“See, print isn’t dying; it’s simply changing. 1UP Presents isn’t a nationally distributed publication, and you won’t find it on newsracks across America. Instead, it’s a print-on-demand magazine, published for and shipped directly to you by Hewlett-Packard’s MagCloud service… There are no ads in this book, so it’s pure content from start to finish. 1UP Presents isn’t trying to be a chronicle of gaming news, either; you aren’t paying for month-old headlines, previews that will be moot in a few months, or reviews of games that you may have played already by the time you read the book.”

Just look at that cover, with it’s Hitchcock references and stark, distinctive art style. Don’t you think it’s worth a few bucks (the issue will set you back $11)? Jeremy Parish and his cadre are among the best in the business, so I’ll definitely be ordering up a dish of 1Up presents.

17 thoughts to “Score one for print: 1Up Presents”