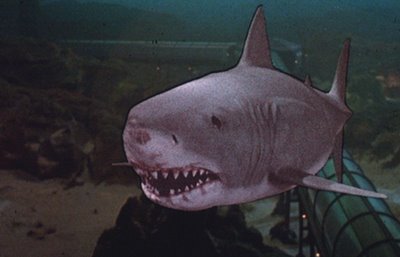 One of the first 3D movies I ever saw was Jaws 3-D. You may remember this one, or you may have been lucky enough to have either missed it or suffered a head injury that wiped it from your memory. In the movie, Dennis Quaid works at a sea park, a sea park that takes in a baby great white shark. The shark dies, mama comes after it and lots and lots of dumb tourists are eaten when the sea park’s underwater tubes get beset by a murderous great white. Spoiler alert, in the end, the shark explodes. In 3D. Yes, the final scene was one shot to make you feel like you were covered in shark viscera. Sadly, that was the best part.

I mention this because today, Majesco announced that they’re making a new Jaws game for the 3DS and the Wii titled Jaws: Ultimate Predator. Both games have you protecting your underwater domain from, get this, “human interlopers” and both have you performing a slate of combat moves such as the “Feeding Frenzy” and “Corkscrew Shred”. The Wii version appears to be the definitive version as it boasts bosses such as the Tiger Shark, Killer Whale and the Sea Serpent. Sea Serpent? Really? The Wii version also allows you to visit such far flung locales as Hawaii, the Great Barrier Reef and Amity Island. Ok, I can see those first two needing protection from human interlopers, but Amity Island? Come on Jaws. Now you’re just being a dick.

Personally, I think this is hilarious, a good mind set to be in given that I’m sure Bill will assign both of these to me. The fact that they’re hoping these games let a new generation experience “the same visceral underwater thrill” of the original movie, a movie that forever changed the landscape of cinema, is just too good to pass up. Sure, Majesco, I’m sure your game, where you pull off melee combos as a shark, is exactly the same thing as my wife still being afraid to go into the ocean some 25+ years after seeing Jaws.

I’m withholding from the redacting on this particular bit of PR majesty because it’s just too good to sully with my snarkiness.

Edison, NJ – June 2, 2011 – Majesco Entertainment Company (NASDAQ: COOL), an innovative provider of video games for the mass market, and Microprose, an executive producer for video games, announced today that JAWS: Ultimate Predator for the Nintendo 3DS™ system and Wii™ is in development for an expected release this fall. Set 35 years after the events of the iconic movie, JAWS: Ultimate Predator is an action-packed and intense game that pays homage to the classic film while putting you in control of one of the most terrifying forces in nature, the unstoppable killing machine that is the great white shark. The games are produced under license from Universal Partnerships & Licensing.

“The Jaws movie defined a generation and forever changed our perception of sharks,” said Jesse Sutton, CEO, Majesco Entertainment. “Sinking your teeth in as the ultimate predator is a strong and compelling concept underlined by the performance of our best-selling Jaws console games years ago. Never before released for Nintendo platforms, JAWS: Ultimate Predator lets a new generation experience that same visceral underwater thrill.”

JAWS: Ultimate Predator on the Nintendo 3DS™ system puts you in control of the hulking terror of the seas like never before, letting you experience the action through the eyes of the beast in startling 3D. Developed by n-Space and produced by Microprose, the Nintendo 3DS™ version of JAWS: Ultimate Predator lets you defeat an army of shark hunters and rule the ocean by unleashing deadly attack combinations such as Feeding Frenzy and Corkscrew Shred while using the Touch Screen to bite, ram and dodge enemies.

JAWS: Ultimate Predator for Wii™ transforms you into the fierce creature, protecting its underwater domain from human interlopers while hunting and killing prey with 20 different advanced attack combos. Fill up the Rage Meter and confront deadly bosses including the Tiger Shark, Killer Whale and Sea Serpent that match JAWS in strength and size. Explore real life environments and lush underwater settings from Hawaii to the Great Barrier Reef, plus the infamous locale where it all started, Amity Island. In addition, discover hidden collectibles and upgrade special abilities to unleash critical damage with maximum power and speed!

JAWS: Ultimate Predator for Nintendo 3DS™ and Wii™ is expected to launch this fall. For additional information about Majesco’s exciting line of products, please visit www.majescoentertainment.com.