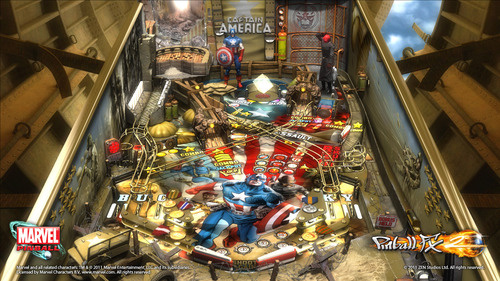 I thought Fantastic Four was good, but I really wished that they had gone with a more fun Jack Kirby retro-style. The gameplay was also too easy, and after the simpler Mars table I was hoping for something more challenging like Rome or Blade. Cap looks very promising though- it’s got a retro World War II style which could be really neat. I’m hoping from some tougher modes and more secrets.

Press follows, if you need to be convinced that this will totally be worth three bucks.

EN Studios today announced Captain America as the next Super Hero to star on his own downloadable Marvel Pinball table from ZEN Studios on Xbox LIVE® Arcade and PlayStation®Network. Joining the Amazing Spider-Man, the Invincible Iron Man, Wolverine,Blade and the Fantastic Four Cap and friends are called upon to battle some of the world’s most dangerous Super Villains.

Set in the classic World War II environment inspired by Ed Brubaker’s Captain America 65th Anniversary Special, the table engages Cap, Bucky and members of the Howling Commandos in a full assault on Baron Zemo’s castle, where Zemo’s Death Ray and canisters of Adhesive X must be neutralized. As the game progresses, Cap will need to free his friends in the Howling Commandos and defeat several low-level missions as he works to confront the Sleeper before taking the Cosmic Cube from the Red Skull in the final battle.

Captain America will be available on June 28, 2011 for PlayStation®Network and June 29, 2011 for Xbox LIVE®Arcade.

4 thoughts to “Next up for Marvel Pinball- Captain America”