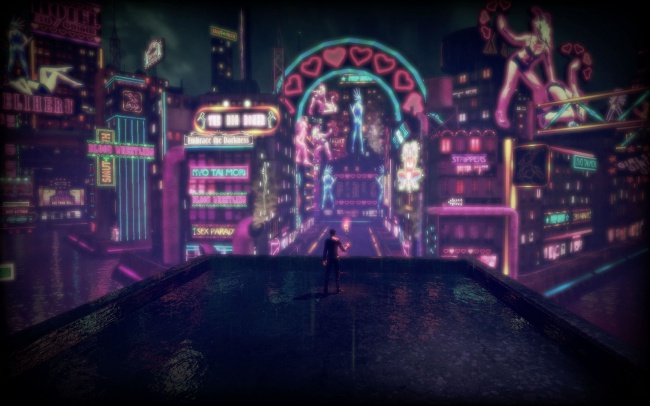 So I’m playing Shadows of the Damned, the new “supergroup” game from Suda 51, Shinji Mikami, and Akira Yamaoka for a review at Gameshark.com, that I should have ready before the weekend. I won’t spoil it here, but I will say that it’s disappointing. I’ve been totally powergaming it, I’m nearly through the fourth chapter and there’s only five so it’ll probably go into the mammoth Codex of Games I’ve Beaten by the end of the night. I was steaming right along until I hit one of the most poorly conceived action sequences in a game since that damned asteroid shooting thing in the first Dead Space. It took me over an hour to get through it, so I’ve got to vent a little rage here today.

In the sequence, which takes place in sort of a hot-pink neon red light district with an extremely cool synth soundtrack, Garcia Hotspur and Johnson have to fend off waves of these giant, Kaiju-sized “hellmonkeys” from a stationary position on top of a building. Johnson calls a phone sex line and becomes the “Big Boner” rifle (complete with a “scha-wing!”). The left and right bumpers pivot Garcia while these giant monsters converge on the building, and he says more puerile and inane one-liners related to male genitals while firing.

Crude, unfunny humor aside, the segment brings the game to a screaming halt because it’s so mechanically screwed up. The aiming throughout the game is crap, but in this section it’s particularly bad with questionable hit detection and the strange need for pinpoint accuracy. And when you turn from facing one street, you can’t see what’s coming down the others, so one of the monsters might be right up on you- and out of the firing radius of the Big Boner. So you die over and over again because you either can’t hit anything with the slow-firing gun or you’re taken by surprise. Then, you’ve got to watch a stupid death animation where Garcia gets thrown into a billboard, followed by the phone sex call again. You can’t skip any of it.

I finally got through the excruciating “Big Boner” sequence and felt relieved that I would never, ever have to do it again. Until the game made me go through two more subsequent- and more difficult- segments of the same horrendous gameplay. Seriously, It’s like a bad practical joke and the player is the mark. I’m really kind of shocked that none of the major (and favorable) reviews I’ve read have mentioned this terrible, terrible portion of the game. It’s one of those things where you find yourself asking, “am I just really bad at this, or is it badly designed?”. With my extensive experience with this section, I’m afraid it’s clearly the latter.

It’s such a terribly conceived, unfun, and annoying section of the game. The rest of the title has hardly been great, but the fact that this part of the game made it through any kind of playtesting or QA is rather shocking. The sequence looks great and sounds great, but playing through was literally a trip through hell. I’m all for difficult games that put up a good fight, but when the challenge is in overcoming s#!tty design, I’ll pass.

I’ve got plenty more to say about the game, which is at this point cruisin’ for a bruisin’. It isn’t nearly as maverick or exciting as anything these guys have done in the past, and if you’re a fan of horror or surrealism then its “weirdness” comes across as trite and silly. If you’ve played No More Heroes, Killer 7, Vanquish or even Bayonetta, this game looks and feels awfully tepid once you get past the death metal record cover style and the occasional bit of cockeyed inspiration. This might turn out to be a 5,000 word review.