So I promised to have Dungeon Siege 3 impressions posted yesterday. Those plans change when you’re offered to join your buddy for $2 pints. Me saying “no” to Bell’s Two-Hearted IPA is just not gonna happen. Last night, though, I did put a walloping two hours into Dungeon Siege 3. It is very decidedly average, so far. It’s not bad. It’s not particularly great. It’s very, very playable. It’s the kind of game you buy and enjoy for a bit, not really regretting the purchase, but barely remembering it a year later. I could change that tune, given how little I’ve played so far, but I feel like I’ve got the game’s number already and am not expecting much in the way of surprises. Here’s some stuff that stuck out to me during my first sit-down…

Because it’s an Obsidian game, and given their history, I should point out that this is the single most polished game I’ve seen them release. We’ll see how it goes, but as of right now: Bravo! PC controls aside, the game works.

The PC controls are close to not being awful. That’s not a backhanded compliment. When you’re just walking around the environment, getting into combat with groups of two or three guys, they seem very usable. This is a trick. They’re not and it’s because of the wonky camera and the bizzare decision to have you control how the camera turns from left to right using the A and D keys, while using the right-mouse button and on-screen pointer to determine movement. Guys, the WASD combo has lasted for like two decades now because it’s a very useful way to control forward, back, left and right. The mouse has been used for nearly as long as a means to control the camera. This is how it’s meant to be and when you try to reinvent the wheel by reversing it bad things happen. And they happen at the worst possible time.

My character is Katarina (I think). She’s a ranged character who uses a rifle at long range and pistols to fend off enemies close in. She’s got a neat accent and an ample bosom. She is your prototypical video game heroine. (I’ll leave it to to decide if that’s a good thing.) Being a ranged character means actually being able to keep your distance from your adversaries. Obisidian very nicely included a block/dodge control (spacebar for block, spacebar plus movement for dodge) that is effective at letting you escape melee and create that distance. The problem is the camera. Typically when you execute this roll back manuever the camera, ever so sure that you want it pointing at your back, flips around to match your facing. So when you come out of the roll you have zero visibility of the space behind you; you know, where all the guys trying to kill you are. So you need to flip the camera around to see, but you can’t just do a quick wrist flick with the mouse (technically you can hold down the Control key and spin the camera with the mouse, but this is a pain too), so you have to hold down A or D to rotate the camera, which happens all too slowly. By the time you come around and can see and shoot an enemy he’s right back on top of you. This is manageable when there’s only a couple dudes chasing after you, but if you get in a bigger battle it’s a nightmare. I aim to switch to my 360 gamepad when I get back to the game tomorrow (tonight is the podcast), and it sounds like that’ll mostly mitigate the issue. I’m glad the controller options is there, but that’s still not acceptable. You release on the PC, you need a passable way to control the game with mouse and keyboard. This is not negotiable. Not everyone has a 360 controller at the ready.

Even taking that factor away, the camera could still use some work. You have only two view options, one that’s relatively over-the-shoulder and one that’s pulled back away. I like the pulled back view, but it’s bit too top-down. You can’t see nearly far enough ahead. Again, not a big problem for melee characters who want to close the distance, but playing the ranged characters can be frustrating because you feel like you should be able to see further down the road and you can’t.

The combat itself I rather like. It’s unremarkable, but it looks like it’ll get the job done and it’s pretty to look at. The character skill system looks like it’ll allow for a lot of variation in how you approach combat. There’s no character building to be done outside of combat, but you don’t really expect that from an action RPG. Character building is divided into the distribution of three types of skill points:

– Ability points: These are core character actions/skills. There are nine total abilities and you don’t get a point to put into them at every level, so you have to be choosy. (I’m not sure of the exact distribution.)
– Proficiency points: These you do get at every level and are used to upgrade and customize your Abilities. There are two proficiencies for each Ability and you can put up to five Proficiency points into each one.
– Talent points: These are general character improvements. There are three tiers of Talents, with only the first tier unlocked to start. Like Proficiencies, you can upgrade each Talent up to five ranks.

The fact that each character has unique options across Abilities, Proficiencies, and Talents, ought to give the game a fair bit of replay value, assuming they really do force you to adjust your play style. 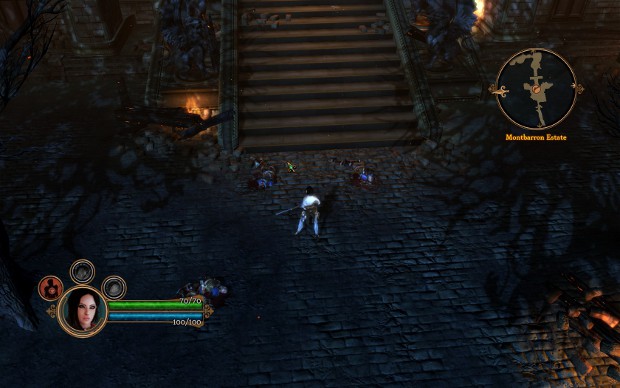 The story… There’s a bunch of stuff about the 10th Legion, some kind of mega army that was laid to waste by the game’s antagonist. My character is a descendant of the commandant or something, raised in hiding from Glenda The Bad Witch. (I really am bad with names.) Some guy named Odo (probably familiar to fans of the first two games?) has called back the offspring of the Legion to wreck Evil’s ugly face. I’m not clear on why the descendants of the Legion are better equipped for this goal than anybody else. I mean my dad could be Eisenhower and that doesn’t make me suited to be Supreme Commander NATO Allied Forces. Perhaps there’s some legacy traits passed down or something special about the 10th I’m not aware of? I’ve got some review guide stuff I need to look at it and see. DS fans, do feel free to school me in the comments on the finer points of the story, while I get my lay of the land. Anyway, you show up at the big meeting and the house is on fire and everyone’s dead, and thus begins your hero’s journey.

I’ll wrap this up with a quick comment on the co-op. I haven’t touched it yet, but I’ve seen some complaints about the fact that the “guest” in a co-op session can’t take their co-op character back to their own game. (There was a pretty damn funny Penny Arcade strip about it this week.) That is going to annoy some people, but having seen how the game plays I can understand it. The co-op and single-player games work in the same environment. Characters created for a game are tied to that game. It’s not that the host has all the power and the guest gets squat. The host’s character (I’m pretty sure) is just as tied to that game, but being the host, they can continue their game whenever they want and the guest can’t. It’s unfair, but the game isn’t built to let two people start a game, go off and play those characters by themselves, and then bring those two characters back together again. It doesn’t work. Now, if Obsidian had wanted to throw players a bone, I think they should let you take your “guest” character and copy them into a duplicate game and continue, losing only the ability to use that character in the original game. That way, if your host buddy quits on the game half way through and you want to continue alone, you have that option. Either way, it is understandable why they designed the game this way. That is, assuming I’m not missing something; again, I haven’t actually played this mode yet.

READ ALSO:  Mass Effect Datapad is OK and I Don’t Hate It

More to come on this one next week.