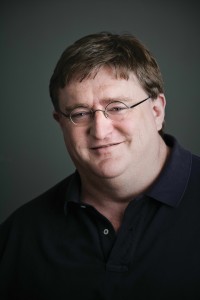 While Bill and Brandon are on vacation, sunning themselves and taking off in hot air balloons and such, I’ve been off gallivanting at the Games 4 Change festival. Picture E3. Then take away the noise, violence, 90% of the budget, and replace hoards of booth-babe photographing game journos with an array of feel-good types – educators, non-profit, government and NGO people and social/educational game developers, a former US vice president and an assortment of other big names, and voila! You have G4C.

The whole idea is that video games (and non digital games) can be harnessed for educational and social justice/social good causes. Games are (or can be) platforms by which charity organizations may raise awareness or funding for projects – like relief for Haiti or Japan after their respective recent natural disasters, for two particularly dramatic examples.

Today, I was lucky enough to attend Gabe Newell’s (yes, that Gabe Newell, Valve co-founder extraordinaire) keynote address to the Games for Learning Institute, where he basically gave a very entertaining – and interesting – whirlwind tour of all the ways games can be used for educational purposes.

He touched on everything from games as a supplement to curriculum (like Portal 2 and learning physics), to their inherent ability to teach concepts (i.e. the way all good games effectively teach you about the systems and mechanics of said game when you learn to play it), to machinima and other creative outlets that games can foster. He even touched on topics like virtual economies and the ways in which Valve, as a developer, learns directly about players through playtesting and iteration.

Ok, so he didn’t have time to delve terribly deeply into any one area, but as an exploration of what’s possible with gaming and virtual worlds, it was fantastic. Newell is simply a compelling, smart guy – and he took questions throughout from the audience on the fly.

In fact, two things that stood out the most to me were prompted by audience questions. The first came from a gentleman who relayed a story – his son was a huge WOW player, and his college application essay spoke about his experiences with the game, and his desire to “save the world” – oh, the idealism of youth, but read on – it gets more depressing.

Now a junior in college, this kid now says he’s far too afraid of screwing things up to go into any “world saving” field. Newell, a college dropout, claimed not to be sure what it is about our system that crushed this kid’s hopes, but I think I have the answer, and Jane McGonigal (now-famous ARG designer and author of Reality Is Broken) won’t like it. The twitter version of my thoughts? Games offer the ideal (the world can be saved through a “correct” path). Real life is infinitely complicated, and people need to feel empowered and engaged through real-life connection. Games can foster that, but they absolutely cannot replace it.

The second – and perhaps most impactful – stand-out moment came when someone asked about the state of current educational games. Not one to pull punches, Newell basically stated that they really aren’t very good – and game developers in this space need to try harder to make actually engaging gameplay, instead of using the “educational” qualification as a crutch to make boring games.

I damn near stood up and clapped for that. However, to really, really change this – developers and designers with AAA talent are going to have to get involved on some level, in the educational space. So how do we (as a culture) incentivize that?

As always, a great talk will prompt more questions than it answers, and this was no different. I came out of the room completely jazzed – and ready to tackle some of those questions on my own.