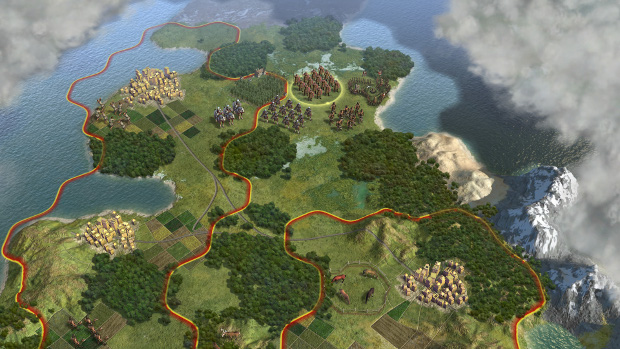 There’s not an official post about it yet at the Civilization 5 forums, but the the latest in Civilization 5 Patch Technology is now available on Steam. I believe this is patch 1.0.1.332. Prominent portions of the fix list include a note that pacing “has received a large amount of work” to facilitate a more challenging end game as well as a host of updates to the UI, diplomacy, AI, gameplay, multiplayer, and balance tweaks, all of which are included in detail after the break. Looking over the list of balance tweaks, I think we’re now well beyond the point where they should be offering an updated manual (even if just electronic only). I’m not sure there’s anything with regards to modifying traits for units, buildings, wonders, etc. that operates exactly as it did when the game was first released…

[NOTES]
* Pacing has received a large amount of work. Expect to have more of a challenge managing your empire at higher difficulty levels than you did before. Consider dropping a difficulty level if you have problems.
* Existing saves will work correctly. However, the balance pass may make your existing happiness lower than expected when loading into your existing save post-patch.

[UI]
* Civilopedia now available in the Main Menu (under “Other”)
* Replay is now available at the end of the game, and through the main menu. You can choose Map, Graphs, and turn-by-turn. Only games played post-patch will apply.
* Great People progress UI addition (upper-left Info Corner UI).
* Combat preview for Aircraft UI addition.
* Fixed aircraft UI issue causing the aircraft selection UI to duplicate itself when rebasing aircraft.
* When loading save game files, you can now order the list by name, or last modified.
* Fix aircraft UI bug that was causing Nuclear Missiles and Atomic Bombers to leave behind container UI after it’s destroyed.
* Removed dead players from Demographics UI.

[DIPLOMACY]
* Made backstab routine more transparent (the dialog will clearly state that they are backstabbing you).
* AI now remembers when it has been nuked, for a permanent diplomatic penalty.
* AI now recognizes a player that captured their capital for a permanent diplomatic penalty.
* End declaration of friendship as soon as war is declared (so can’t later get a notification that it has expired).
* AI remembers if you satisfied one of their requests (positive modifier, decays over time, based on value of items granted).
* AI remembers if you fought against a common foe (positive modifier, decays over time, based on damage done to the common foe).
* Track trades between players and allow that to positively influence relationships (the better the deal for the AI, the stronger the modifier). Particularly useful for bribing a hostile AI.

[AI]
* Rebalanced AI flavors and strategies for unit training to improve AI army composition and build choices.
* Allow the AI to consider Pikeman units for offensive roles when they can’t build Swordsman or Longswordsman.
* Allow Alexander and Darius to consider Hoplites and Immortals for offensive roles in early game.
* AI players may now use a Great General in early rushes on higher difficulties.
* Modified flavor tags for Atomic Bomb and Nuclear Missile so AI builds them only when it decides it specifically wants Nukes.
* Block City States from building carriers, atomic weapons.
* Strategies for building mobile units now persist into Modern era to help AI decisions for when to build tanks and modern armor.
* Dampen early game Grand Strategies to give the AI time to expand (AI were sometimes stuck in a single city until late in the game).
* Victory adjustments to AI behaviors, including alternate victory paths as “back-ups” (for example, building the Apollo Program, even if they are not going for a Spaceship victory).
* Revise code calculating recommended army size (using smaller armies if the threat is low).
* Correct issue that was causing late-game continent-bound AI’s to over-build units intending to invade, and never properly execute the amphibious invasion.
* Scale recommended army sizes based on difficulty level.
* AI grand strategy and flavor weighting balance pass.
* AI policy choice weighting balance pass.
* AI tech choice weighting balance pass.

[GAMEPLAY]
* Player is now given the option to return a CS worker that they free from barbarians.
* Roads under captured cities no longer charge maintenance.
* Machu Picchu no longer destroyed when capturing a city containing Machu Picchu.
* Fixed Oligarchy bug that was causing the effect to expire when loading from a save.

[MULTIPLAYER]
* Multiplayer AI is now consistent with Single Player AI.
* Hot-Seat is now available through the multiplayer menu.
o You can have as many humans playing as available slots in the game.
o Password protection is built in.
o All maps, including purchased and user-created, are available to play in Hot-Seat.
o While play-by-email is not yet implemented, we did include an in-between turn saving option for those that want to play via email.