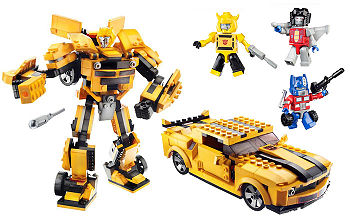 Along with being a huge fan of games, I also like to while away my hours playing with toys, specifically Transformers and LEGO building sets. Many the lunch hour are spent at Wal-Mart, Target and Toys R Us looking for toys and my basement and work cubicle are a testament to my inability to grow up. That’s ok. The toys keep me young.

One of the very first things I posted about on this site, was Hasbro’s intention to make a line of Transformers building block sets called Kre-O. The sets aren’t supposed to officially come out until July but Toys R Us apparently knows more about selling toys that are tied to summer blockbusters than Hasbro does, and have put some of the sets out for public consumption. I was originally skeptical but broke through that skepticism to purchase a set and I’m here to talk all about them. How lucky for you!

One would think that between my love of LEGO sets and my love of Transformers, these sets would be a no-brainer, but to that I would say two words: Mega Bloks. Mega Bloks are, in a word, terrible. Their instructions are terrible and the pieces have almost a supernatural ability to not stay together, somehow in defiance of the physical laws of this universe. Mega Bloks has the Halo licence, and as much as I have bagged on Halo in the past, I still have a love for the franchise, a love I wanted to express through their building sets. The SPARTAN armor sets I have aren’t too bad, despite the fact that the labels on Master Chief consistently peel off, but the Warthog set I have falls apart if you look at it wrong. I have played my fair share of Halo in the past, but that’s not enough to spend money on sub-par sets.

So when Hasbro announced the Kre-O line, yeah, I didn’t have high hopes. The sets are an odd mix of old and new designs, drawing from the original cartoons, the newer cartoons and the Bayformers of the movies. Optimus, for example, is a Peterbilt in his 70 dollar incarnation, but is a more traditional cab in the cheaper, eight buck version. Bumblebee is a Camaro, or some similarly designed vehicle, but the robot mode has his old head. Megatron comes with the most changes, being a truck, a form he has only taken in the latest movie, and only sporting a G1 head to give old school fans something to latch on to. Other bots such as Mirage, Jazz, Prowl and Sideswipe look like their G1 counterparts with Starscream being similar to Megatron in that he doesn’t look like he comes from any particular incarnation. The difference is that his set is pretty dang sweet while Megatron’s set is one I can, and probably will do without.

I was originally disappointed to hear that the sets don’t transform. If you want the bot in car mode, you build it as a car. Then, when your tired of the car, you have to take it all apart and rebuild it as a robot. In practice though, I actually like this idea. For one, it doubles the value of the set for me, without doubling the price. The sets are all priced in line with similarly sized LEGO sets, however unlike LEGO sets where I’m finished once I build it once, with these sets I get to build the model twice. Now, I know that technically, LEGO sets have infinite replayability but you have to understand that I buy the sets to build what’s on the box. I don’t have the imagination or talent to go off of the reservation and build something else, and besides, I’m buying the sets for what the set builds. I don’t want a Raiders of the Lost Ark themed jungle rocket, I want to see a Indiana Jones mini-figure running away from a giant, plastic boulder. Similarly, I don’t want Bumblebee to be a dump truck. I want him to be a Camaro. Then, I want him to be a robot and stay that way.

The other side to this whole non-transforming thing is that the designers didn’t have to take transformation into account when designing the vehicle modes or robot modes. The designers of the action figures do an amazing job with making toys that transform in (mostly) satisfying ways, but as talented as the designers are, they do have limitations, limitations that usually manifest themselves as robots that have bits of cars hanging off of them (we call that “kibble” in the toy collecting business), or vehicles with robot limbs hanging off of them. Me, I like the truck version of Optimus Prie in the movies, but for the smaller toys, he usually has half of a truck as a backpack. With the building sets, the kibble is done away with. Not every piece in the set is used in either mode and it allows for a much more streamlined vehicle and robot.

The blocks themselves are pretty dang close to LEGO blocks. The package states that they’ll work with “popular building sets”, something I haven’t tried but based on what I’ve seen, have no reason to not believe it. The blocks are slightly lighter, without feeling flimsy and aside from one circular peg on every piece being hollow, at first glance you can’t tell that these aren’t LEGO blocks.

The instructions are well done, as well as using a 2D picture to explain how to build a 3D object can be. I wish the sets had numbered bags, one of my biggest complaints about some of the LEGO sets, but given the dual nature of the building sets, I can understand how that would be difficult. The stickers that come with the sets are paper based, not plastic based, and as such they’re not as good as the LEGO sets, but they do stick well, I’ll give them that. Almost too well. Make sure they’re on the way you want them the first time.

The models they make are very satisfying in both size and heft. Bumblebee is a bigger set than Sideswipe but Sideswipe’s vehicle form is no less solid. When you’re making the cars, there’s a lot of layering going on, layering that seems like the result of some serious over-engineering, but the result is a car with some serious heft. I haven’t tried, but I would imagine that these sets can withstand some serious play sessions with only minimal piece loss, which is more than I can say for a lot of LEGO sets I’ve made. In the interest of full disclosure, I haven’t made the robots yet, but if the cars are any indication, the robots will be just as sturdy. I know, I know, the goods are with the robots, but so far I’m really digging these sets and I wanted to talk about them. My apologies if the robots end up sucking. The mini-figures the sets come with, called Kre-ons, are adorable even if I have a problem with a tiny, robot version of Bumblebee riding in a larger, vehicular version of himself. I’m also not sure why every set needs a huge selection of weapons for the Kre-ons, including a sniper rifle, but hey, whatever.

I don’t think I’ll buy all of the sets, but there’s a really nice variety of sets at different price points, from an eight dollar Optimus Prime and Bumblebee all the way up to a 60 buck Optimus Prime set which I own but haven’t put together yet. Now that LEGO only makes Star Wars sets from the Clone Wars, or remakes of classic Star Wars sets I already have, and with no new Batman sets on the horizon, these Transformer sets will more than sate my appetite for building sets. It will be interesting to see what sets and characters they come up with for the next batch of models. You can be damn sure that if they release Dinobot sets, I will buy two of each so that I have them in both robot and dinosaur mode. Grimlock best have a crown or there will be problems.

If you’re at all curious, then pick up one of the eight buck sets and see if it suits your fancy. If you like LEGO sets, then I think you’ll be right at home here.

One thought to “Let’s Talk Toys”