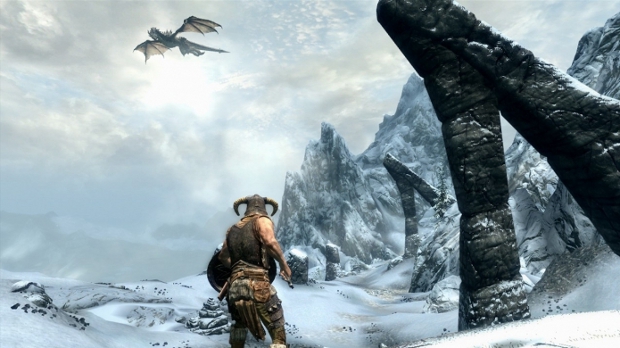 I’ve been seeing this excellent AusGamers interview with Bethesda’s Todd Howard make the rounds on various sites because in it Howard mentions their intention to do bigger DLC for Skyrim that’s more in line with doing an expansion pack. A good notion, that, but if Skyrim is on your must buy list you should read the full interview for everything else discussed there. Lots of good details about the mod community and Howard’s desire to find a way to put them on the Xbox. Some good nuggets about the quest engine, “Radiant Story,” how they unintentionally rebuilt the Gamebryo engine for this game, and why they demo on the 360 even though the PC version will look better. Here’s the bit about the evolution from Gamebryo to Creation:

Well we came off of Fallout 3 and we’re always moving our own technology forward. Whether that’s using a piece of middleware or doing AI or things like that. We had a pretty big list of what we felt the 360, the PS3 and the high-end PCs could do, and it wasn’t like we said “we’re going to re-write the engine”; we just sort of started with “okay, let’s do this to the graphics; let’s do this to the gameplay”.

We started hitting that hard right after Fallout 3, so I’d say after the course of the next year and a half it turns out we’d re-written all of this — look how it looks; we’re not using this anymore; we’re not using that anymore. So that’s when we actually decided to brand it; we should call it something of our own.

But it wasn’t from the get go “we’re going to re-write the whole engine”. It was a priority list and we ended up re-writing more than we thought we were gonna, but it worked out.