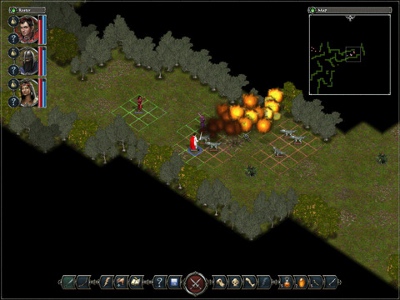 So I’m at a total loss as to what to do for my usual Wednesday blatherings. Not sure why. It’s been a slow news week, unless you find stories about Nintendo bringing crappy games like Urban Champion to the 3DS to be exciting news. The fact that I’m coming off of a three day weekend also doesn’t help. Honestly, since coming back from vacation I’ve had a hard time doing anything game writing related. Such is the curse of the excellent vacation. You have such a good time doing nothing that you don’t want to do anything.

So, in lieu of having anything to actually talk about, I figured I’d give some mini-reviews of what I’ve been playing lately. It’s mostly all about shooting bugs and killing ogres although not in the same game, so prepare to be amazed. There might be a little thievery in there too though. In my heart I’m a thief, not a murderer…

Earth Defense Force: Insect Armageddon
I could have picked this one up earlier in the weekend as GameStop started selling it early but my laziness and the siren call of my pajamas kept me at home. I may have a review copy coming, but alas, I couldn’t wait. I’ve played through the first of three chapters and some of the second, six missions in total, and from what I can tell so far, it is totally Earth Defense Force. The refreshing thing about this game is that it is extremely focused in its execution. It is, in a nutshell, a game about shooting giant insects, arachnids and robots. That’s it. It’s not a game about a dude trying to find his wife who was captured by an alien force or about a woman looking to deliver letters to random people as the universe burns. It is about bugs. Lots and lots of bugs, and they want to kill you and you can’t let them.

Now, the downside to this is that if you don’t want to kill a lot of bugs then the game has nothing else to offer you. That’s ok with me though, because I want to shoot bugs. Desperately. It supports three person co-op, something I plan on getting in on tonight with Petey. The AI does a decent job filling in for humans in the single player, killing bugs and reviving you when you need to be revived, but you don’t get the full experience of playing with the different armor load outs unless you play with other people. It looks like your squad outfits itself with the generic trooper load out, which, ironically enough, is what I use, so you won’t see your AI squadmates taking to the skies in their jetpack or laying down suppressing fire with their chaingun. I’m looking forward to seeing how the different armor classes play as the little I messed around with the tactical armor was a hoot. Throwing down a turret and watching it chew through ants as you take down an anthill is pretty dang cool, even if I don’t have the speediness to zip around the battlefield and pick up health packs.

On a side note, Todd would totally hate this game as the spiders show up pretty early on and they are both giant and numerous. They also like to jump on you, which would probably cause Todd to faint. The spiders aren’t too bad but those dang ticks are annoying as hell. Not only are they a pain to get off of you but the picture of a giant, bloodsucking parasite attaching itself to you like some sort of fleshy backpack is kind of gross. The giant spider thingy that disgorges them ain’t no picnic either. Still, even if you don’t like bugs, the game is worth playing if anything to see your squadmate shotgun an ant so that it flies across the map. Being able to blow up any building is also a nice touch. Yay destruction!

It’s too early to tell how the game will end up being graded, but so far I have gotten everything I expected out of it, namely a shit-ton of enemies, lots and lots of chaos and the ability to blow up every building I can see if I so choose.

Avadon: The Black Fortress
I mentioned this one on this past week’s Jumping the Shark and my opinion has not changed. I am completely hooked on this game. I bought it due to the comparisons to Baldur’s Gate, which I think are a bit of a stretch, but I can tell you that I absolutely do not regret my ten dollar purchase and I am anxiously awaiting Spiderweb’s next game. I like that the game throws dialog choices at you and I honestly have no idea where they may lead the story. The basic story is that there are five countries that make up The Pact and they’re supposed to work together and basically do what they’re told and in return they get support from Avadon in terms of protection and other matters. You’re a Hand of Avadon, basically a soldier who speaks for Avadon and as such, has free reign in the nations of the Pact to do whatever you deem necessary to keep the Pact intact. You’re a new Hand but you start getting sent on all of these missions because Hands are being targeted and killed and there aren’t enough Hands to go around. At the center of it all is a guy named Redbeard who reminds me of John Popper from Blues Traveler back before he lost all of the weight. I’m pretty sure I’m the only person who makes this comparison. Any way, Redbeard keeps the Pact intact and you can tell something isn’t quite right with him, if only because by all accounts he should be a pretty old guy and he is not.

READ ALSO:  Links from the Mothership

As you progress on your missions you’ll come across people breaking the laws of the Pact or approaching you for information regarding the other nations of the Pact and it gets hard to tell just what you should do. I tend to not like playing the goody-two-shoes as I find it boring so I’ve been passing information on to people when I probably shouldn’t as well as looking the other way for certain crimes against the Pact. We’ll see if this leads anywhere interesting, but so far these decisions are giving the world a good amount of color.

I do wish the targeting squares were a bit bigger, or there was some way to zoom in as I tend to fat finger my commands and I may end up telling my party members to go next to the intended target instead of attack them, or try to move away from the target which then gets them stuck and forces them to use a ranged weapon. On a related note, you have a bottomless junk bag you can fill with the stuff you want to sell and navigating through it gets tough as it seems like the hit detection on the down arrow for it is somewhat wonky. I also have a Journal screen filled with empty entries and no idea what I’m supposed to do with them. These are all small complaints though and they don’t affect the enjoyment of the game at all. I hope that other game developers take a look at this game and see that the iPad is a great device for these kind of RPG’s. From what Jeff at Spiderweb says, the sales have been good, so that can only be good for those looking to bring more of these kinds of games to the iPad. If it’s between giving Spiderweb, or studios like it, my money for an original RPG like this or giving my money to Gameloft for some Final Fantasy rip-off, I’d much rather do the former. That being said, I did get the Gameloft Final Fantasy rip-off (it was free) and it’s not half-bad. You know, for a rip-off.

Sly 2: Band of Thieves
I played the first Sly as part of the Sly Cooper Collection and while I finished it, and got my first platinum trophy as a result, I finished it more out of a lack of anything better to play than a deep, abiding desire to finish the game. There was a lot about the game I wasn’t thrilled with, but the characters were fun to hang out with and I figured that if I had paid for all three games, I might as well play it. Sly 2 mixed up the structure of the game so that all of your smaller missions all work towards a larger heist that you pull off to recover a part of the final boss you defeat at the end of the first Sly. In the first game all of your missions were to obtain keys that unlocked your means of getting to the final boss, but this new structure is more interesting and is more thief-like in its implementation. There are still too many variations in the gameplay for my tastes, only because not all of them are winners, but at least they tried. It will be interesting to see how Sly 3 takes what they did with Sly 2 and builds upon it. For 14 bucks, the Sly collection was definitely worth it. If you can find it, which is an increasingly difficult prospect, and you haven’t played these games before, definitely pick it up.