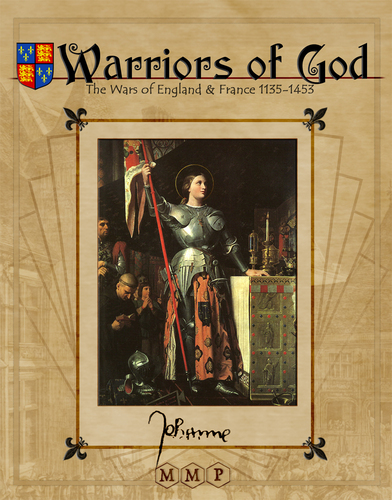 One of the things I find interesting about boardgame reviews is that there is a tightrope act involved when it comes time to actually write one. When are you ready to write an evaluation? With most videogames it’s easy. But this is more like playing an open ended game like Civ – when are you truly ready to write the review? Is one play enough? Two? Ten?

With MMP’s Warriors of God, I’ve logged half a dozen games, each taking roughly 2-4 hours so I’ve played around 20 hours with the game. I’m still learning new things about it each time I play so it’s either a terribly good design or I’m not ready to review it. I’m hoping it’s the former.

Warriors of God, a game I find to be absolutely brilliant, is also divisive due to its uncompromising reliance on the roll of the dice. Even some hard-line wargamers shy away from it due to its sometime wild shifts of fortune. But when a game tries to simulate the Hundred Years’ War with most of its major players over the course of 3-4 hours you’re going to have to deal with a bit of uncertainty.

You don’t need to be a student of history to enjoy the game, although knowing some basic themes will help. The short version: The throne of France is vacant. England and France both claim rights to it. They fight on and off for about, oh, 116 years. England wins some notable fights (Agincourt), plundering France for all its worth. Joan of Arc shows up and France “wins” even though England got rich off the war and France, well, didn’t.

There is another scenario in the game called The Lion in Winter which runs from 1135-1258. Again, just having a basic idea of the setting is enough to enjoy the game. This one even has Robin Hood in it. Simply put – are you interested at all in the upcoming Crusader Kings II from Paradox? Then you may want to give this a look…. 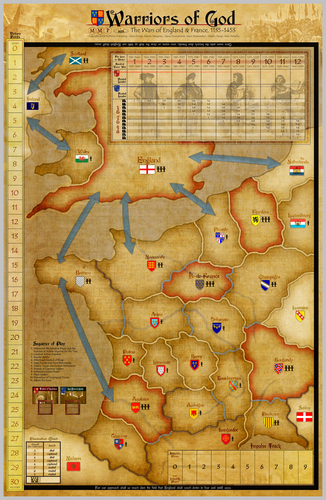 So what about these wild turns of fortune? This is where waiting a bit before rushing to review a game like Warriors of God, and most boardgames I’d argue, is crucial. This is the type of game that after one play has the potential to leave a bad taste in your mouth, feeling like you just wasted an afternoon playing a silly game that’s all about luck.

The game is (up to) 12 turns in length, each turn taking in several years of real time. You control several important characters from smaller nobles to the potential king. These nobles lead armies and no army can survive leaderless and at the end of each turn you roll a die for every noble on the board. This is basically a death roll to see if the noble in question has survived the decade. Perhaps illness struck down the lord? Maybe old age? Maybe he fell off his horse? Who knows? It’s not like these guys hung around a long time in the 15th century. Each game turn the odds of a noble surviving drops. If the noble has been in play for one turn it’s a one in six chance of dying outside of combat. Each turn that number goes up by one. Simple math tells you each noble has a limited amount of board time. Use them while you can.

If you don’t plan for this possible smack of the hand of fate it can certainly leave you high and dry without a leader for your army. One turn of awful die rolls and you can lose several nobles in one fell swoop. Of course in a long game this usually ends up balancing out in the end but it’s something that has the potential to crush your best laid plans. These leaders are the heart and soul of the game as a strong leader can field a massive army – and control it – where a poor noble is about as useful as chopsticks at a barbeque. I love how this game simulates an incompetent leader’s inability to manage a large army and a brilliant leader’s ability to take a smaller force and use it like an X-ACTO Knife.

Despite the wargame trappings this is at its heart an area control game. It’s the easiest way to earn the victory points which are needed to win. Controlling important regions (marked on the map with a value rating of 1 to 3) earn you points; killing enemy leaders earns you points, as does capturing leaders. What I love about this VP system is that you don’t earn points for simply winning a battle. In war, battles are a means to an end and those ends are almost always political. The same is true here.

I’m not going to go into the rules as you can read them online at your leisure (https://www.multimanpublishing.com/LinkClick.aspx?fileticket=QYWK9bQZuhE%3d&tabid=65 ) but it’s worth noting that the game is not at all difficult to learn. As wargames go it’s clearly on the “easy” side of the fence compared to the more meaty options for those who wish to slop around in minutiae. Toss in the fact that this makes for a great solo experience and you have a fantastic entry level wargame for those with an interest in history.

Replayability is sky high here as some nobles start the game on either side which radically alters how the game plays out. Nobles being fickle beasts would often change sides during a fight so their whimsy is simulated accurately here. Then when you add the end of turn die rolls to see who survived, you really get a nice bit of variety each game you play. While the struggle for specific territory is common how those battles play out and the forces within are almost always different. It’s quite possible that Joan of Arc shows up, marches toward Ile de France, and dies of pneumonia on the journey before she gets to do anything. The next game she very well might kick the pig dogs out of France.

I should note the beautiful production values as well. The counters used for leaders and soldiers alike are huge – easy to read and are thick suckers. The map is also easy on the eyes although I suggest buying some Plexiglas to place over the paper map to smooth it out. (If you play boardgames regularly you need to invest in Plexiglas regardless.)

Watching the Hundred Years’ War play out in a boardgame is fascinating and the sweeping history of that time period is guided with an expert hand by designers Makoto Nakajima and Adam Starkweather and I cannot wait until the next project finally sees the light of day; Warriors of Japan can’t get here fast enough.

3 thoughts to “Warriors of God Review”