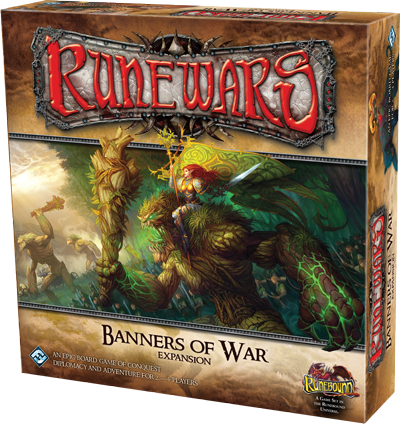 Fantasy Flight’s Runewars came out at the beginning of 2010 and although I liked the game- I’d go so far as to call it the last good big-box game the firm has released- there were some wonky bits and some questionable patches in its fairly cluttered, kitchen sink-ish design. I also took umbrage to being asked to pay $100 retail for a giant box that was more than half empty. It was a $60-$70 game made to look like a $100 one with silly 3D mountains. It really speaks to designer Corey Koniesckza’s talent that there were some genuinely brilliant parts that shone through some sharp negatives, and it’s undoubtedly a very cool game. And it’s needed an expansion from day one.

Today, rather than announcing more Living Card Game expansions, expansions for games that already have a bunch of expansions, or expansions for expansions to games that already have expansions (I’m not making that up, BTW), they’re announcing an expansion for Runewars, Banners of War. It sounds like it adds some interesting things and might fix some things with FFG’s “buffet” style pick-and-choose expansion model, but it also doesn’t add factions for a fifth or sixth player, which would have have been my #1 addition. No price is listed, but I’m thinking that it looks like a $59.95er, meaning that a full Runewars set now will set you back $160. Ouch.

War continues to ravage the continent of Terrinoth. The free cities change hands and tyrants bleed the land dry with a death toll that has not been seen since the great wars of ages past. Each nation knows it cannot slow the passage of time, or the armies of their enemies without help. Therefore, each nation has made pacts of allegiance with entities who, until now, have remained passive. The once dormant Great Wyrms flap their long dead wings on blackened skies, while the ancients of the forest march forward against battalions of Novice Wizards who can finally practice their arts in the open, under political jurisdiction. They will be needed if the Sisters of Blood, who now march out from their mysterious Convent of Blood are to be defeated.

Fantasy Flight Games is thrilled to announce the upcoming release of Banners of War, an expansion for Runewars! With over 50 new figures and hundreds of new cards and tokens, Banners of War builds on the strategy and diplomacy of the war for the dragon runes.

In Banners of War, players take fate into their own hands by adding new units to their armies, conscripting heroes to lead them, employing new tactics against their foes, and seeking out a legendary Lost City that promises untold treasure to the ruler who takes control of it. The way shall not be easy, however. It will take keen leadership and tactics to best the rival armies. They too are raising their banners to prepare the march, ready to meet your legions head on.

Mighty Rocs and ambitious Novice Wizards join the ranks of the Daqan Lords, while the Latari have formed a pact with ancient forest spirits, enlisting the aid of the mighty Leonx…and even the trees themselves. Meanwhile, the Uthuk sink ever deeper into corruption; covens of blood witches call upon ancient evils, including demons of gluttony with an insatiable appetite for suffering. And the lands of the Great Betrayer bear witness to further sacrilege: the Vampires of Bilehall have allied themselves with Waiqar, and the massive Great Wyrms, long-dead relics of the Dragon Wars, are rising again!

Learn more at our Banners of War website and keep checking back for previews in the coming weeks. In the fourth quarter of 2011, tip the scales in your favor!

One thought to “Runewars finally getting an expansion”