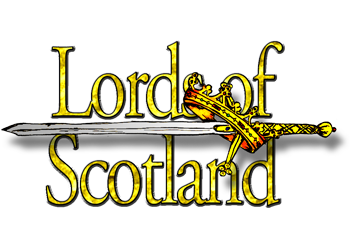 I am always on the lookout for games to play with my family. That might sound odd coming from someone who writes about games for a living, but it’s true. The reason being, my family isn’t made up of die hard gamers, which is perfectly fine by me.

My wife plays all sorts of boardgames which is great because it’s a perfect way for us to spend time together that doesn’t involve movies or eating dinner or watching our daughter do some activity. It might sound silly, but when you have been married for over a decade, especially when you also have kids, it’s easy for the parents to divert all of their focus on the children, leaving no time at all for mom and dad to NOT be just mom and dad. The last thing we want is to have our daughter go off to college one day and then look at each other and not know who that person is anymore. Thankfully boardgames work for her because the only video/computer game she ever enjoyed was Heroes of Might and Magic. Boardgames are a release for her because her job is filled with more stress than I could ever hope to deal with.

At the same time, my daughter isn’t a crazed gamer, either. She has her moments of gamer addiction: Rock Band 1/2 was a constant in my house for months. Littlebigplanet 2 was a game that really sunk its hooks into her. She dabbles with the DS, enjoys iPad games for a while and she’s always messing around with the Sims and will never turn down a Mario Kart Wii session but despite being 10 and nearing 11 years old, she’s nowhere near the level of gamer-a-holic that I was at that age. She’s never begging for new games or always asking to use the Xbox or the PS3 or Wii, and has never fully embraced boardgames, at least not yet. Again, all fine by me.

However, the one type of game which can get all three of us to the table is a good (nasty) card game. Games like Guillotine, Citadels, Ivanhoe, and Innovation are staples at our house because my daughter finds these card games more appealing than rules heavy boardgames and she finds the “light” games (Ticket to Ride) boring. Smart girl. .

This is a 2-5 player quick and extremely dirty card game centered on the various clans of Scotland during the wars for Scottish Independence when the throne was vacant and everyone fought each other. The theme here is mostly window dressing, despite the artwork of the various clans on the cards themselves, but who doesn’t like a good Scottish clan war?

The game centers on “skirmishes” between all of the players, and each single skirmish consists of five rounds of turn-order card playing or drawing. After all cards are played their strength points are added up and the winner receives a certain number of points for the victory and the first player to reach 40 points wins the game and is crowned King of Scotland.

Sounds easy enough, but there is a deceiving amount of planning involved here as each clan (of which there are eight plus two Bruce cards) are listed with strength values from 1-12 (sort of like a deck of playing cards). Each clan also possesses a unique power. Clan Wemyss allows you to discard another player’s clan card, Clan Scott allows you to copy the power of another clan, etc. All nine clans have a unique power and some are terribly evil. 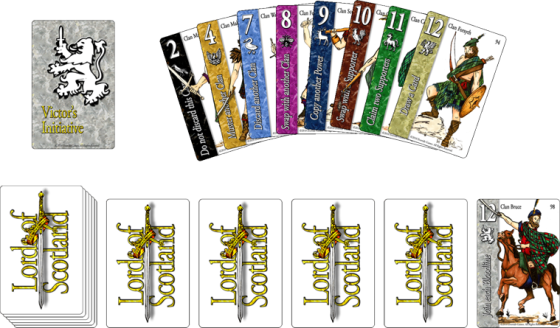 The trick is that to trigger these clan powers you must play a card with a strength value equal to or lower than anyone else’s current face up card in the entire skirmish. So if you are a few rounds into a skirmish the chance of you being able to play a strength 12 card and also use its associated clan power is minimal. It’s a balancing mechanic that allows low strength cards to become incredibly valuable, especially early in the five round skirmish because if you start off playing a strength 1 card it basically nullifies all powers for that entire skirmish, unless other strength 1 cards are played.

You may also opt to play cards face down on your turn in order to hide its strength value and its clan allegiance. Playing cards face down doesn’t allow you to use its power but it’s a viable strategy because at the conclusion of each skirmish if you use only ONE clan bloodlines (all Clan Macdonnell for example) you double the entire army’s total strength value. So when the clans fight as one they’re quite the force.

The scoring mechanic is worth noting as well. At the start of each skirmish a number of clan cards equal to the number of players are drawn at random and laid to the side to form a “support pile”; the strength value of each card determines the points you earn for winning the skirmish, coming in second, third, etc. So, yes, it’s quite possible in a three player game to draw a 1, 2, and a 12. The winner of the skirmish gets 12 points, 2nd place gets 2, and last gets the 1.

But again the design takes this into account as one clan power swaps a played card with a card from the supporter pile and another allow you to take TWO support cards if you win the skirmish, and so on. But having each round vary in importance is a brilliant idea and makes the game truly cutthroat as players decide if a skirmish is really worth going crazy over due to the victory point distribution.

When considering the devilishly evil play of a low strength card which can screw up your best laid plans combined with sneaky face down card plays and the painful moment when you think you have a skirmish locked up only to see a supporter card switched out so your hard fought win earns you a whopping two points, Lords of Scotland has proved itself to be a huge hit with the family because we love a good familial back stab.

After you are familiar with the clan powers it plays extremely fast (30 minutes tops) and those 40 points can add up quick so you need to keep an eye on those support piles each round and learn when to go for the kill.

Best part? You can grab this game for as little as $6+shipping at most online retailers. Seriously— six bucks.

I can’t make it any easier for you than that.

6 thoughts to “Lords of Scotland Review”