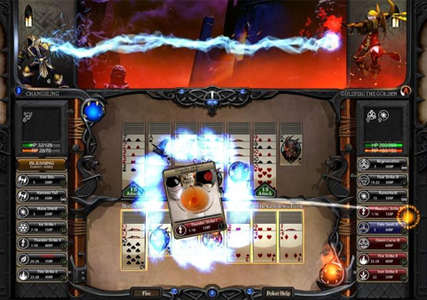 I’ve been playing a lot of Runespell: Overture lately, as I wrote about on Wednesday, so I figured I’d tie this week’s food column to it. Unfortunately finding a food that matches an RPG-Poker mashup proved to be harder than I had thought. For one, there’s no food in the game. Seriously, you’re like and undead guy and you don’t seem to eat anything. Like ever. Second, the game is set in what appears to be Norway, or at the very least has strong Norwegian influences. Other than religiously riding the Maelstrom ride every time I go to Epcot, I don’t know anything about Norway, its people, or its food.

So there I was, googling “poker food” and coming up with nothing but a BBC show that features chefs playing a form of poker where they have to make recipes based off of predetermined ingredient cards. Lots of duck, lots of yuck. Then I remembered that Bill fancies himself a card shark and not the Bob Eubanks type, but an actual, bonafide poker player. I asked him if he played poker and he replied that he used to, but 5 card draw o5 5 card stuff, none of this river stuff, as he put it. You could feel the disdain oozing out of the monitor, the idea of Texas Hold ‘Em being anathema to his cold, calculating mind. Let the backwards baseball cap types play those games. No, Bill Abner plays poker the way God intended, one hand on his cards, ace up his sleeve and six-shooter at the ready.

So I asked Bill what food I should do and he very quickly replied with one word. Cocktails. I mentioned that you’re not supposed to drink while playing and his silence led me to believe that were I in his physical presence, he would have struck me. Cocktails it is..

In a way, cocktails make sense. All of the good poker games I’ve been to have been with friends, and if you can’t let your guard down among friends, where’s the fun? Besides, friends don’t mind being fleeced by other friends when that first batch of friends is sloppy drunk on scotch. Oh so I’ve been told. Plus, it’s easy to hold a drink in one hand while you hold your cards in the other, and no one need be subjected to a recipe for fried herring.

Casino
What better way to start a night of poker drinking with a casino. Ditch the maraschino cherry if it ain’t manly enough for you, or, better yet, take more than one to throw the other player off of their game. Who can read tells when watching a grown man wolf down maraschino cherries?
Ingredients
1. 2 ounces gin
2. 1/8 oz lemon juice
3. 1/8 oz Maraschino liqueur
4. 2 dashes orange bitters
5. Maraschino cherry garnish

Mixing Steps
1. Combine all ingredients in a cocktail shaker with ice.
2. Shake well and strain into a cocktail glass.

Monte Carlo
Sure, it’s better to drink this while playing baccarat instead of poker, but no one plays baccarat but tuxedo clad British spies or power hungry super villains. You and Doug from accounting can stick with poker, and drink this instead. Benedictine can be sweet, so adjust your proportions accordingly.
Ingredients
1. 2 1/4 ounces Rye whiskey
2. 3/4 ounce Benedictine
3. 1 dash Angostura bitters

Mixing Steps
1. Combine all ingredients in a mixing glass with ice.
2. Stir until fully mixed and chilled and strain into a cocktail glass.

Poker Face
Singing “my-my-my-my-my-my my-my poker face” while drinking this drink is not only recommended, it’s mandatory. This way you can annoy your opponents into screwing up.
Ingredients
1. 1 1/2 ounces tequila
2. 4 ounces pineapple juice
3. 1/2 oz triple sec

Mixing Steps
1. Combine all ingredients in a highball glass almost full with ice.
2. Stir well and garnish with a lime wedge.

Pink Flamingo
Sure this one may be a little more pink than you’d like at the poker table, but just imagine yourself standing in the burning heat of Nevada, looking out at the desert at the site of what would become one of the most luxurious hotels of its day. You’re hot, you’re sweaty, you’re thinking about all of the money you’re going to make. What would taste good right now? A pink flamingo, that’s what.
Ingredients
1. 1 1/2 oz vodka
2. 1 1/2 oz Cointreau orange liqueur
3. 3/4 glass orange juice
4. 1 dash sloe gin

Mixing Steps
1. Pour all of the alcohol in a highball glass filled with ice.
2. Top with the orange juice and stir well.

Leaving Las Vegas
What better way to end your night of drunken gambling than with a drink named for a movie about a guy looking to drink himself to death? I sure as hell can’t think of one. There’s a lot of booze in this one so if you haven’t left Las Vegas by the time this drink comes out, you’ll be leaving shortly.
Ingredients
1. 1 oz vodka
2. 1 oz triple sec
3. 1 oz light rum
4. 1 oz gin
5. 1 splash Sprite
6. 2 tbsp sugar
7. 1 splash lemonade

Mixing Steps
1. Combine all of the alcohol and sugar in a highball glass filled with ice.
2. Top with the lemonade and the Sprite. Mix well.

Ah, drinks and cards, is there anything better. Well, sure. Drinks, cards and winning piles of cash, but seeing how I rarely get that last one when I combine those first two, I really can’t say.

Still hungry? Check out the Don’t Shoot the Food archive.