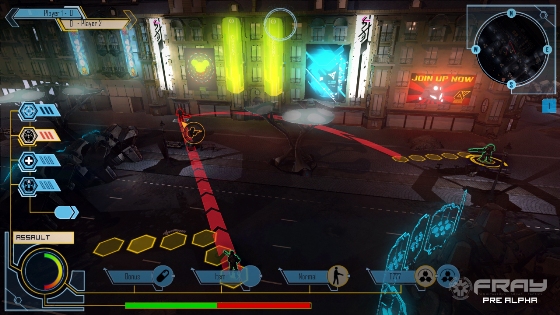 Today at the Mothership I posted my interview with Alexandre Avenard of Brain Candy regarding the company’s upcoming simultaneous turn based tactical game Fray.

Even in this early stage the game looks and sounds really, really cool. Plus with the critical success of the brilliant Frozen Synapse, it’s a great time to talk about this one.

Keep an eye on its development and we’ll let you know when the beat program is ready.

David (lead game designer), Robert (technical director) and myself have known each other since high school, over 12 years ago, and we had been discussing making games together since then, but never really acted on it, and we all went to do our own thing for a while. A couple of years ago, I left Ubisoft and contacted them saying “now is the time, we’re still young, energetic, let’s do this!” We wanted to set up an indie company that would create games with original gameplay, which would be generally discarded by the mainstream industry. We had faith in our competence and we had the first ideas for Fray, so we decided to give it a shot.

READ ALSO:  The Making of The Witcher 2

2 thoughts to “Get Excited About Fray”