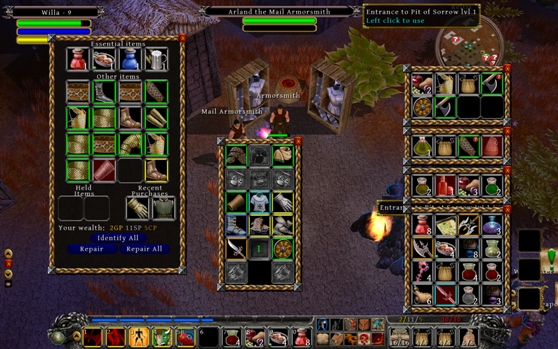 I have things to do. Being the EiC of a game site, and writing daily here at No High Scores, and living with a wife, daughter, two dogs, and parents who moved within 10 minutes of our house a few months ago – I’m a generally busy fellow. I also have a boardgame addiction to deal with.

So playing “older” games is a rare thing. (Older meaning anything over two weeks post launch.) It’s a sad part of doing this job, because I tend to enjoy games that have longer shelf lives than most. I lamented about this fact a few weeks ago – how I no longer have time for Shogun 2, a game I loved…when I was playing it.

But I have a little secret: I can’t stop playing Din’s Curse: Demon War. We reviewed Din’s Curse for GameShark last year, giving it high marks, but Demon War is a more subtle expansion so I felt it better to cover it here, in a more conversational tone than a full on review because I wanted to share with you just how brilliant this game is…

Din’s Curse is yet another spin on the Diablo model: there’s a town that needs saved and you’re the hero called on to do it. It’s a formula we have seen play out time and time again. However, in Din’s Curse, you are forced to play the role of hero by the deity Din who has “cursed” you into helping each town you journey to – it’s unclear why Din has done this to you…but you have little say in the matter.

What brings the game to life is its constantly evolving and randomly generated world. The ‘town’ in most games of this ilk are merely there as stockpiles as you go back to buy stuff, to heal, and to maybe stash equipment.

Each town in Din’s Curse needs to be saved, literally, and if you piddle around too long the monsters take their show to the streets. Gates appear and monsters flood the town and attack its people. If the monsters take over, the town dies and Din whisks you off again to another town and you start over (keeping your level progression in tact). (edit: You CAN of course save each town as well)

Monsters also grow in stature and the game will even alert you to this. “Gunbad has started an Orc uprising on level 6!” or “The Skeleton King is now Elite”. These are never good bits of news.

I also love how when you enter a dungeon you may see monsters fighting each other and I have delved deep into an area doing minimal fighting as I watch animated corpses fight evil leprechauns or skeletons battle dire wolves while I try to avoid detection. Of course in the long term you’re going to be doing a lot of mouse clicking, which is how all of these games work.

But with the constant threat of a town attack and the speed at which you need to complete quests, and Demon War adds a LOT of new quests, I never got bored like I did when playing Torchlight (and Diablo for that matter). There is always a point to what you are doing in Din’s Curse and not just clicking your mouse to watch the bad guys die. Take the defensive quests for example – if you complete these quests the townspeople will build a lighting obelisk, for example, top help fend off monsters as they enter the area. Stop an uprising and it slows down the planned town invasion. Other quests may pay off down the road as the people start to love you and shower you with goodies.

READ ALSO:  Win a Copy of the LOTR Card Game

You can also play nice and help the people out by giving them armor to help stay off attacks as well. The people in the town are alive more than ever in Demon War – they have moods, they may fight each other, they may beg for food, or get hit with the plague. When Din said you need to save these people – he wasn’t kidding. These places are a mess! Basically, Demon War takes Din’s Curse and just adds a ton of flavor, as well as a new Demon Hunter class. 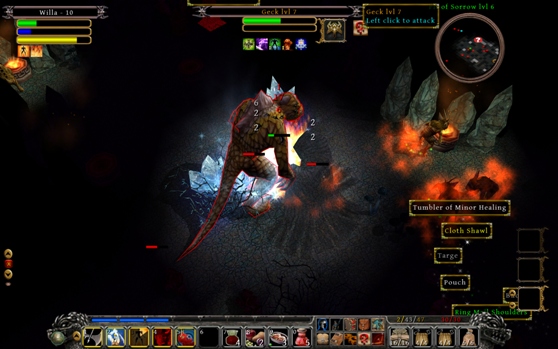 Classes in Din’s Curse can be combined, and developer Soldak Entertainment says the total is now up to 196 combinations. I believe it. So you can literally play the game any way you want. This includes co-op play which is an absolute riot in this game – I played the game on a LAN and had a blast. Taking a buddy into Din’s Curse is about as good as these types of games get.

The knock that Din’s Curse gets is in its graphics and animations. It’s a fair complaint as there is no doubt that games like Torchlight look a hell of a lot better when it comes to character models and spell effects. But I feel that after a while the graphics in a game like this sort of dissolve into the background and I focus more on what I’m doing than what the graphics look like. And there is no question, at all, that I’d rather play Din’s Curse than Torchlight. Not that Torchlight is a bad game but Din’s Curse has proved significantly more valuable. It’s really not even close.

This is one game that I don’t plan on shelving anytime soon. That makes two in the past month along with Panzer Corps. Who said the summer was slow?

You can check out more about the game at the Soldak website: http://www.soldak.com/Dins-Curse