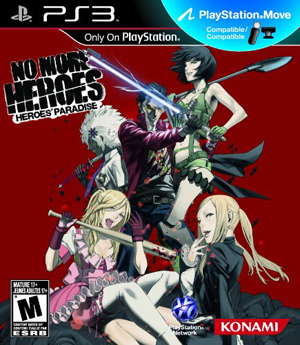 Just one more week before Deus Ex: Human Revolution! At this point, my concern is that I’m going to be enamored with the game not because it’s good, but because it’s new. Luckily I’m not reviewing it so I don’t have to care from a critical point of view. Just from a time and money point of view. Luckily I have tons of both. That’s sarcasm, by the way.

This week has El Shaddai coming out, which may come as a surprise to you as it was supposed to come out weeks ago. Then again, maybe you’re up on your video games based on Dead Sea Scrolls. Who am I to say? This week also has the PS3 version of No More Heroes for those that want to use their Move for something new and exciting, only that it isn’t new. It may still be exciting though.

My games. Let me show you them…

New Releases
No More Heroes: Heroes’ Paradise is the 2008 version of No More Heroes, only HD-afied and with Move support and a bunch of side missions. Nothing like collecting garbage and mowing the lawn in hi-def to get one to feel like the world’s greatest assassin.

I saw El Shaddai: Ascension of the Metatron at E3 at my very last appointment. At that point, I probably could not have successfully recited my own name much less made a critical assessment of a game. I did find it interesting that in Japan they released several runs of the jeans that Lucifer wears, and they all sold out. I can’t think of one article of clothing from a video game I’d like to wear. Then again, I got a Chibiterasu tattoo, so who the hell am I to talk?

If you like empires, and ages and the internet, then Age of Empires Online may be for you. Oddly enough, the Amazon listing for this game says that young children may choke on uninflated balloons. I don’t know what it has to do with the game, as I couldn’t find any listing of a balloon coming with the game. I guess those folks at Amazon just want you to make sure you don’t have any uninflated balloons lying around before you go and ignore your young children while playing Age of Empires Online.

I don’t have a link, but Bastion comes out this week for the PC. You should totally buy it. From Dust does too, but I don’t know if you should buy that one. Bill thinks you should, but what does he know?

Finally Puzzler World 2 comes out for the DS this week. It boasts over 1200 games, a claim I would love to see refuted. I think I’d stop counting once I got to 600 games but I’m one of the lazy ones. Maybe you have the guts to go all of the way.

Deals
Before we get to the store specific deals, the 3DS is now $170. Whee.

Target – Target has a bunch of games on sale for $25 so check your stores for the full list, but the ones in the ad are: Just Dance 2, Country Dance, Epic Mickey, Transformers: DOTM (DS), Phineas and Ferb: Across the 2nd Dimension (DS), Assassins Creed: Brotherhood, Dragon Age 2 and Sims 3.

Steam – Steam has all of the Broken Swors games as well as number of Patrician and Tropico games on sale. Head to the specials page for the full list.

Impulse – Impulse has the Baldur’s Gate and Icewind Dale games on sale for five bucks each. That’s a ton of isometric D&D excellence right there. Head to the sale page for more details.