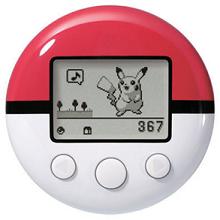 It’s probably hyperbole to call a length of time just shy of 500 days an era, but “The End of Almost A Year and A Half” doesn’t sound as good so I’m sticking with “era”.

Regardless of the chronological nomenclature, I have officially captured every Pokemon possible with the Pokewalker that came with Pokemon SoulSilver. I logged over 2.1 million steps over the course of almost 500 days but every last bugger is mine. I have no intention of doing anything with the captured beasts, even if there are some good ones in there, as transferring them to Pokemon Black/White is done one beast at a time. Plus, what would I do with them once they’re there? No, this was just about seeing if I could capture them all and sticking with it until I did. As goals go, it was pretty silly, but seeing how most of my goals involve pie, having a goal that required me to walk a lot was a nice change. Now that I’ve captured everything in the device, I find myself constantly reaching for it, checking to make sure it’s still on my belt. I could still use it as a pedometer, but I don’t have a need to keep track of my steps if the capture of miniaturized monsters isn’t involved. Plus, having to remember to sync it up with the game every night was a bit of a pain even if it did give me a reason to power up the 3DS.

Given that the 3DS has a pedometer in it, I would imagine that any pokemon catching tied to walking in the eventual 3DS Pokemon game will come from walking with the 3DS itself. If it’s anything like the walking in Nintendogs, they’ll reward you for something crappy like 100 steps. Then, old timers like me can say that we used to have to walk for five miles to unlock Spiritomb and that’s how we liked it!