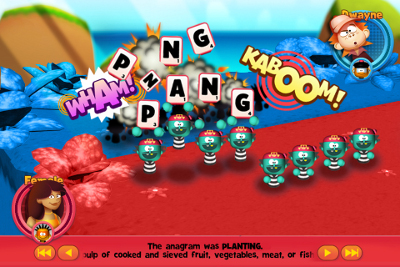 One of the last games I saw at E3, and by that I mean like, the second to last game, was Quarrel, a delightful mix of Scrabble and Risk. Two players face off for control of parts of a map by seeing who can come up with the best word from a jumble of letters. I saw the XBLA version which had support for more than two players, as well as different AI levels so that you could tune the experience for younger players. While the XBLA version is still in development, to be released at some unknown time, the iOS version comes out on August 25th. That’s like, two days from now. Two days! Hardly enough time for me to learn how to spell lugubrious! Oh. Well, look at that. I guess I’m getting worked up over nothing.

This version of the game supports two people and I have no idea if adjustable AI is in the mix for this version, but luckily the game will be released in two flavors: Quarrel, the free version and Quarrel Deluxe, the paid version. Being able to try free versions of games is one of the best features of iOS games, so take advantage of it and give this game a try.

One thought to “Quarrel Comes to iOS Aug 25”