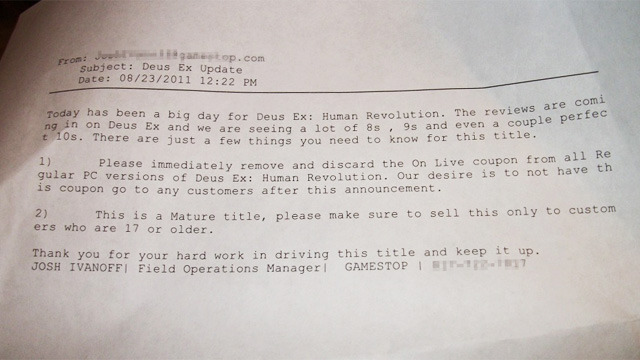 Apologies for being off the news desk, but this Madden thing has taken up most of the week but tomorrow I get to actually talk about Madden which I am itching to do. Tonight’s podcast should be fun.

Anyway, yesterday, as you may have heard, it was reported that GameStop went all Watergate Break In on Deus Ex: Human Revolution on the PC, by cracking open the cases of several copies of the game and swiping out the On Live coupon that was tucked inside.

This directive came from on high as reported by Ars Technica. Ben even posted the memo from http://onlivespot.blogspot.com (pictured).

After this went down and the negative press started to to seep into GameStop HQ, it was decided to simply remove all “regular PC copies” of Deus Ex Human Revolution from shelves because On Live is a “competing service”. In other words — Square didn’t tell GameStop it had included the coupon, GameStop hated the idea of selling a game that promoted a service that is a direct competitor so it simply cracked open the game without telling its customers and sold it as new.

It’s always the cover up that gets you.

If GameStop had simply come out and made it clear to shoppers that it was removing that coupon, this is a non story.