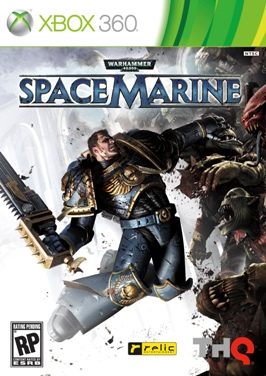 Greetings from beautiful Colorado! That’s where I am right now and have been for the entire weekend, no doubt suffering from the throes of some sort of altitude sickness. I don’t really know as this column was written before I left resulting in some sort of futuristic time travel paradox. I hope Colorado is nice. Those Coors Light commercials always made it look nice as long as you didn’t mind getting run over by silver bullet trains while you spend time in the mountains.

I think it’s safe to say that the summer gaming doldrums are behind us and the holiday season has been officially kicked off. Space Marine, Dead Island, Driver and Resistance 3 all launch this week, along with other, lesser known titles, thereby sending the costs of your leisure time skyrocketing into the heavens, borne on the wings of commerce. Me, I’m not going to buy any of them right now as I’m still playing DE:HR and I have reviews to do. Play them for me will you, and let me know how they are?

Before we get to the games, unfortunately you’re on your own for deals this week. As this column was written on Friday, none of the deals had been announced. CheapAssGamer.com is your best friend in this department though, so check with them and they’ll get you squared away.

I know Bill is probably chomping at the bit for some good, old fashioned ork killing mayhem and I can’t blame him. Space Marine played well at E3 and I can only imagine it’s been tightened up a whole bunch since then. When I get a lull in my schedule, this will be the first game I pick up.

I played both Resistance and Resistance 2 and finished neither. I found both of them to be flat, lifeless and boring which is surprising given how much I love the Ratchet and Clank games. As a result, I have zero interest in Resistance 3 despite the funky box art.

I played Dead Island at E3 and it wasn’t my thing. It will be interesting to see how reviews of this game shake out as the marketing campaign has been excellent but it takes a lot more than some kick ass videos to make a good game. Now, I wasn’t playing with a particularly communicative co-op bunch at E3, which certainly didn’t help, so I am prepared to chalk some of my disinterest up to my zombie killing companions. Still, I think I’m just zombied out. Bring on the werevampires!

Early reviews of Driver: San Francisco are surprisingly positive. I think the whole consciousness shifting idea is an interesting one and I haven’t played a good arcade racer in quite some time. Yet another game to add to the list of “Games To Be Played Come Summertime”.

If you have a PS3 and haven’t played the Uncharted games then you should totally get the Uncharted Greatest Hits Dual Pack when it drops. It has Uncharted, Uncharted 2 and all of the Uncharted 2 DLC. That’s a lot of sexy sarcasm and half-tucked shirts! Seriously though, the games are fantastic and this way you’ll be all set for Uncharted 3 in November.

Rise of Nightmares drops this week, challenging Kinect owners to battle hordes of undead with nothing but their flailing limbs. Let’s hope all of those exercise games have trained you to fight off the legions of horrific, shambling evil.

I tried to play a Disgaea game once. Once. After about 15 minutes the game flung itself out of my PSP and returned itself to the store claiming “owner stupidity” as the reason. I simply can not wrap my head around how that game works. Plenty can though, and love the series for all of its crazy complexity. How happy they must be that Disgaea 4: A Promise Unforgotten drops this week. Hooray for them!

Nintendo doesn’t want to be lumped in with all of the other Tuesday games so they’re releasing Star Fox 64 3D on a Friday. That makes perfect sense, because when consumers go to the store on Tuesday to decide what to spend their limited funds on, the last thing you’d want to do is put your product in front of them. Why, that would be downright silly. Any way, it’s another Nintendo 64 remake. Color me unenthused.