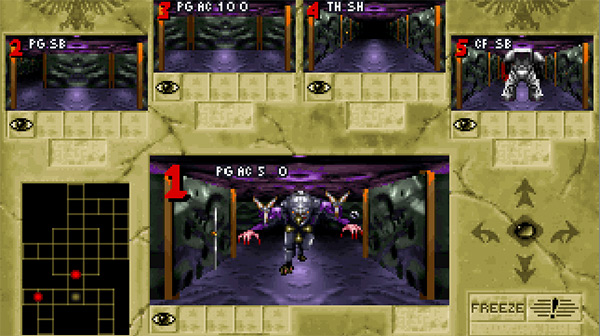 I’m at the end of Chapter 8 in Space Marine. I have killed a veritable shit-ton of orks at this point: stomping in their heads, gutting them with a chainsword, slashing them with a power axe, crushing them with a thunder hammer, shooting them from distance — I even killed one poor greenskin point blank with a damn melta gun.

There are scenes in this game that fulfill 20 year old 40K fantasies for me. Sitting back with a bolter and mowing down charging orks? Oh, man– a simple yet entirely guilty pleasure. Not that I don’t have issues with the game — I certainly do. I’m writing the review for Gameshark while Master Barnes will be doing the full review here at NHS.

THQ and Relic said repeatedly that they wanted the game to come off like a blockbuster piece of entertainment. Mission accomplished. It’s a shockingly visceral game. 100% pure adrenaline and with Relic’s ability to absolutely NAIL the 40K universe’s look and feel, it’s a dream game for a 40K nut. If you’re NOT a 40K nut? I’m not sure it’s going to resonate as much. But I am a 40K nut so I cannot say that with full confidence but the gameplay is exceedingly straight forward: see ork — kill ork. Space Marine is ALL about the delivery.

The characters lack any depth at all — in fact how weird is it that I like the characters in a real time strategy game more than this epic action adventure? There’s more depth in the talking heads of Dawn of War than there is here. I also don’t fully grasp the idea of how “Send in the Ultramarines” means…three dudes vs an army of orks. Ultramarines are tough, but…how often is it that you have to suspend your disbelief in a game about space orks? I used to play 40K with an ork army…I don’t remember them being marine fodder.

READ ALSO:  Blasts from the Past

Anyway, as entertaining as the game is, it makes me want to play something with a bit more bite to it and not just a run and gun and smash and stomp ork killing simulator. There is a brief section in Space Marine where you enter a sewer system. It’s quiet. There are tunnels everywhere and even though it’s still, like the rest of the game, a totally linear corridor with one entry/exit point, it’s a pretty cool section of the game. I want more of that.

In fact, this is what I want someone to make…

I think it would be a guaranteed success and a game that 40K and non 40K fans would take to.

I want a remake of Space Hulk.

For those unfamiliar, Space Hulk is a game about teamwork, close quarter fighting, and is really akin to sci-fi horror.

You and four buddies join up to play a game of Space Hulk on the 360/PC/PS3. Each player takes the role of a Terminator Space Marine. Not the regular schmoes you see walking around E3 or even the captain from the THQ game — I mean total bad ass Terminator Marines. 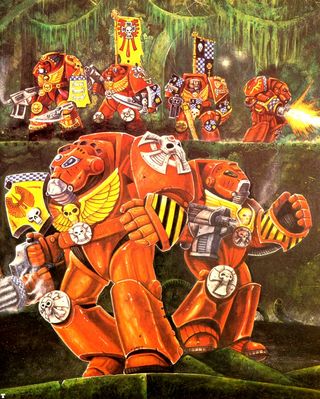 Each player picks out his/her weapon loadout, depending on the mission objective — all of which include the five of you boarding a floating derelict spaceship. Maybe you are after a lost relic? Maybe you just need to cleanse the ship with purifying flame, whatever the goal may be.

The ships are dark — pitch black except for some track lighting in some places. The corridors are narrow, in places allowing only singe file walking. As Terminators, you can’t run — it’s a slow process as the team investigates the huge ships. Constant communication with teammates is essential — a lonewolf Terminator, as bad ass as they are, is no match for a lightning quick attack from the enemy — the Genestealers.

As thick as Terminator armor is, Genestealers can go through it like it’s paper, especially if a Terminator doesn’t have hand to hand weapons like lightning claws or a Thunder Hammer/Shield combo. So working as a team would be absolutely critical. I have played many a team based game and a game like this would provide a lot of laughs with the right group.

“Ok look if you go off down the first corridor you see without telling anyone you are doing it, you’re going to die.”

“Hey, where’s Todd? He was last in line…did he turn down that first hallway?”

“Hey guys, I found the room we’re supposed to burn and…holy shit these things are everywhere!”

The Genestealsers outnumber the Terminators — almost always. They appear as green or red blobs on a scanner much like the creatures in Aliens. This provides multiple “Hudson” moments.

“Man, this is a big fucking signal!”

The slow pace, the initial quiet only to be followed by bursts of furious fighting is the hallmark of Space Hulk. Now imagine that another group of players is playing the Genestealers–respawning after getting blasted by a Terminator set to Overwatch as he waits for the first sign of movement coming from the long, black corridor. The tension in a game like this is really off the charts, especially if your mission is to blast a room with flame and the guy carrying the flamer has five shots and if he dies, it’s game over.

You can get this experience in boardgame form by playing Space Hulk, which is one of the best Games Workshop games ever produced. 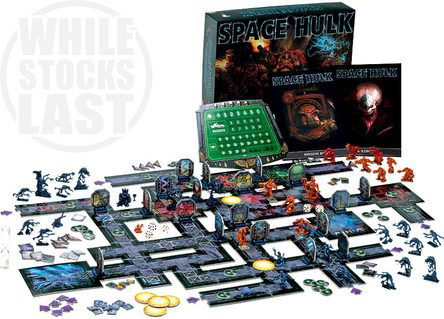 Or you can dig up the old Amiga classic from EA — one of the very first games to ever use Direct X. I played this game to death and loved every minute of it. Just a great, great game.

As cool as playing Space Marine is, this is the 40K game I want to play. It would be like Left 4 Dead…with more scares, better weapons and the fulfillment of blasting a room with a heavy flamer and winning one for the Emperor.