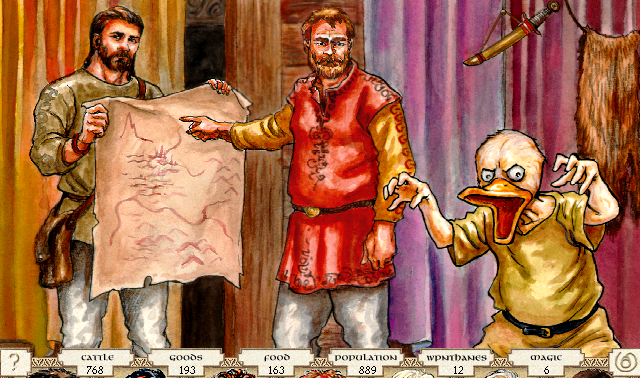 WOW. Now here’s one that I didn’t expect.

A-Sharp’s cult classic 1999 PC game King of Dragon Pass has turned up on the App Store. If you’ve never played it and are remotely interested in RPGs, Civilization-style games, or even management games like Game Dev Story, you should really take a look at this amazing title. It’s unlike anything you’ve ever played.

Based on the Glorantha setting that has framed a number of tabletop RPGs and board games (RuneQuest and Dragon Pass among them), the game puts you in charge of a small clan of sort of Nordic-ish people all the way from their prehistory during the time of the gods up until you start coalescing power and building tribes with other clans. Along the way, logistical and administrative matters will take up most of your time, as will dealing with over 500 random events that require you to actually roleplay and make meaningful political, moral, and spiritual decisions that may have repercussions or effects that may not be apparent until many years down the road.

What’s really compelling about this game to me, other than the incredibly detailed game-signficant lore that you actually need to read to play the game, is that there is zero visible action in the game, as well as zero numbers. You will never see a screen that tells you what numerical effect a blessing from a particular god has, and you will never be able to min/max your way to the most efficient clan. All of that is backended in favor of a rich, narrative storytelling presentation. Everything that happens is accompanied by well-written text and hand-drawn artwork- no floating numbers or DPS values. No paper doll equipment screens. It feels much more like an actual role playing game than most that claim that classification.

It’s very, very complex, menu-driven, and opaque so be prepared. There’s not a casual bone in its body. Yet, despite pages and pages of must-read manual material and help screens, it works extremely well as an IOS game. It’s completely turn-based, and it’s easy to tap the icon, make a couple of decisions and shift some things around, and put it away until later. But that’s hard to do, I find myself very much falling into the “one more turn” trap. Particularly since I’m re-learning the game and experimenting a lot.

It’s $9.99, but this game is worth a hundred “Profit Bird” titles you’ll play for ten minutes before moving on. This is the rare IOS game that you can really sink your teeth into. What are you waiting for?

12 thoughts to “King of Dragon Pass comes to IOS”