I finished the campaign in Space Marine Friday night and even took the plunge and jumped into a random multiplayer game for about an hour and a half, playing a game with random dudes, not acting particularly, Space Marine -like. Multiplayer, as it stands now in Space Marine, is a missed opportunity, and instead plays like almost every other MP game at the moment — you earn levels, earn more “stuff” and I found it generally yawn inducing. There’s no asymmetry at all except for the gear people use because they are a higher rank/level. No Orks. No personality. Jump packs are fun.

The co-op mode drops in October but it’s not a campaign co-op — it’s just a couple of maps. That holds very little interest to me either. Playing the campaign cooperatively…that’s what I want. I’m going to write my review tonight — I’m leaning “B” and it’s that high only because of the awesome job Relic did in capturing the look, feel, and style of Warhammer 40K. This game lives off its license.

I don’t think this is spoiler territory, but the final “battle” in the game is atrocious. It was lazy, unsatisfying, and silly. I wish I had finished it before we recorded the podcast because the ending would have made the list of bad endings alongside Fallout 3, Dead Space and Batman Arkham Asylum (which I somehow forgot to mention on the show).

I also said last week that I wanted to play Space Hulk with those pretty graphics. It’s true, I do. I think that game if designed properly would be incredible. A few readers emailed me about the Space Hulk card game from FFG (which I own). It’s a neat game for what it is. I like that you can play it solo. Obviously it’s no replacement to the boardgame, which is balls out great. Of course the card game doesn’t run you over $100, either…

But one reader pointed me to something I didn’t know existed: a freeware game called Alien Assault. Apparently, the game was made with full-on Space Hulk in mind and was pitched to THQ who rejected it so the guys who made it stripped out all of the Warhammer stuff but kept the basic design — which is pure Space Hulk. I assume Games Workshop doesn’t know it exists or they’d try to take it down. That’s a very GW thing to do.

And yes, it’s free. Not “sorta free” but 100% free although if you play it as much as I have the past few days you should kick in some cash to the developers. It’s low on production values (it’s free, people) but I have had a blast.

You can grab the game here. https://www.teardown.se/alienassault.html 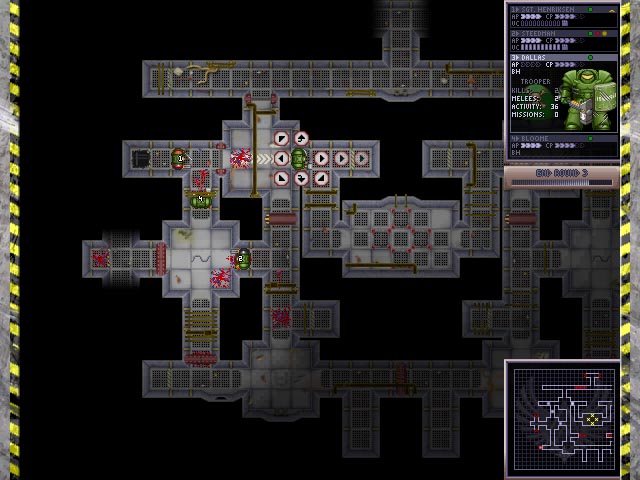 There’s a hefty manual which was hosted (oddly) on Rapidshare but I grabbed it and placed it locally. Grab it here:

So, if you are looking for a true Sunday Time Waster that doesn’t involve 10-hours of NFL action?

Trust me — I just made your day.