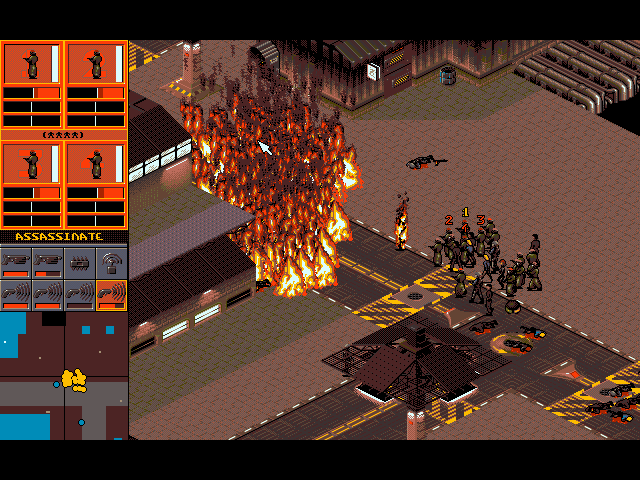 This was one of the worst kept secrets in the business and it was finally officially revealed. EA and Starbreeze (The Chronicles of Riddick, The Darkness) are working on a sequel to the classic Bullfrog game Syndicate.

But hold on there, Sparky. This is not a remake. A remake would be a tactical/global strategy game if pure awesomeness.

This is a first person shooter.

Electronic Arts and Starbreeze Studios today announced the reinvention of Syndicate, a storied franchise at EA. Created by an all-new development team from the awarding-winning studio that brought gamers The Chronicles of Riddick and The Darkness, Starbreeze Studios delivers a unique and brutal sci-fi first-person shooter experience set in a not too distant future, where business is war. Players take on the role of Miles Kilo, Eurocorp’s latest prototype agent, and embark on an epic action adventure full of corruption and revenge.

“We are excited to finally reveal what we’ve been working on the past couple years,” says Mikael Nermark, CEO of Starbreeze Studios. “It’s been a great experience working with EA, and an amazing opportunity for us to use our expertise in the first person shooter and action genres to bring back, and reignite, the signature action/espionage gameplay of Syndicate.”

Set in 2069, Syndicate takes players into a dark, Machiavellian world run without government oversight with many syndicates vying for total dominance of their local market place. With no one to question their intentions or actions, three mega corporations – Eurocorp, Cayman Global, and Aspari – are at the forefront of this brutal war for control of the pivotal American market. In the world of Syndicate, everything is digitally connected, including the people. Players aren’t limited to the weapons in their hands. Through DART 6 bio-chip technology implanted in their head, players can slow down time and breach the digital world around them to take down their foes using a variety of upgradable hacking mechanics.

“Our goal with Syndicate is to provide a challenging action shooter for today’s gamers as well as fans of the original. I’m sure they will enjoy and recognize the legacy that made it such a classic,” says Jeff Gamon, EA Partners Executive Producer. “Fans of the franchise will recognize many weapons and environments in the game, but in a whole new way. The game also provides a separate and deep 4-player co-op mode featuring missions from the original cult classic, which adds another layer of depth to the overall experience.”